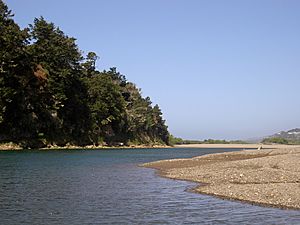 Gualala (formerly, Guadala, Walhalla, and Wallala) is an unincorporated community in Mendocino County in the U.S. state of California. It is located north of The Sea Ranch and south of Point Arena, California. Gualala shares its southern border with the southern border of Mendocino County. It is located on the Pacific coast at the mouth of the Gualala River, on State Route 1. It serves as a commercial center for the surrounding area. Gualala was once a logging town, but tourism is now its central economic activity.

"Gualala" was the name given to the site of today's Gualala by the Pomo who had named the area ah kha wa la lee, meaning "coming down water place"

In 1836, Governor Nicolás Gutiérrez granted General Rafael Gracie 62.5 square miles (162 km2) of land between the Gualala River and Mal Paso Creek. Gracie used the land to graze cattle. Shortly after he sold the land for $10,000, it was discovered that the grant was invalid.

About 1861 tourists began coming to Gualala to hunt and fish and get away from the crowded cities. Around that same time Cyrus Robinson filed a homestead for all of the area which is now Gualala where they built a hotel, a saloon and a ferry. They also supervised the Post Office (which was also the stage stop), the Wells Fargo Express and the Western Union. By the end of the 1800s Gualala had become a major commercial hub for the entire area with a dancing school, the Gualala Municipal Brass Band, and an Opera House.

In 1902, Elizabeth Robinson, Cyrus' wife, died; and their hotel burned down in a fire the following year. The hotel was later rebuilt to the south of where it had originally been at a cost of $6,000.

In 1907, Mark Pedotti and Antonio Ciapusci bought the Gualala Hotel property which included 636 acres and among them they divided the property with Antonio acquiring the area of Gualala who later died in 1932. His son George and wife, Ida inherited the land after his death.

Today tourists come to nearby Sea Ranch, California for which Gualala is providing tourist and commercial services.

A year after Cyrus Robinson received the property, he sold part of the land in 1862 to a company so they could build a lumber mill at the mouth of Mill Gulch. The lumber-mill logged the redwood trees until it burned down in a fire on September 14, 1906.

All content from Kiddle encyclopedia articles (including the article images and facts) can be freely used under Attribution-ShareAlike license, unless stated otherwise. Cite this article:
Gualala, California Facts for Kids. Kiddle Encyclopedia.