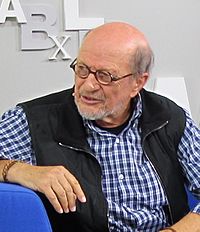 Guillermo Mordillo (4 August 1932 – 30 June 2019), known simply as Mordillo, was an Argentine cartoonist and animator. He was born in Buenos Aires. Mordillo was one of the most widely published cartoonists of the 1970s. He was known for creating greeting cards for Hallmark Cards.

From 1976 to 1981, Mordillo's cartoons were used by Slovenian artist Miki Muster to create Mordillo, a series of 400 short animations (300 min) that were later presented at Cannes and bought by television studios from 30 countries.

All content from Kiddle encyclopedia articles (including the article images and facts) can be freely used under Attribution-ShareAlike license, unless stated otherwise. Cite this article:
Guillermo Mordillo Facts for Kids. Kiddle Encyclopedia.