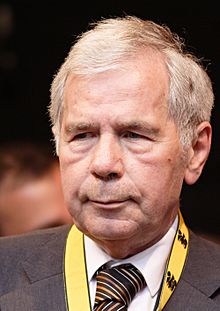 Horn was born in Budapest. He played a major role in the demolishing of the Iron Curtain (Berlin Wall) in the German Democratic Republic in 1989.

In 1990, Horn won the Charlemagne Prize.

All content from Kiddle encyclopedia articles (including the article images and facts) can be freely used under Attribution-ShareAlike license, unless stated otherwise. Cite this article:
Gyula Horn Facts for Kids. Kiddle Encyclopedia.