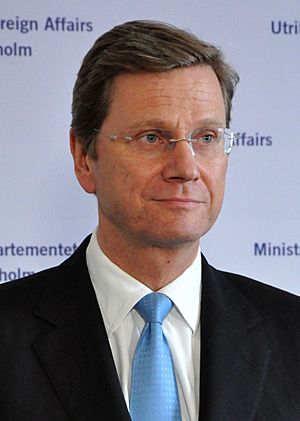 Guido Westerwelle (27 December 1961 – 18 March 2016) was a German politician. He was Foreign Minister and Vice-Chancellor of Germany.

He was an attorney before he became a politician. From 1994 to 2001 he was secretary general of the German liberal party, the Freie Demokratische Partei (FDP). In 2001 he became the leader of the party.

Westerwelle was also the leader of the FDP parliamentary group and from 1999 to 2005 head of the opposition in the German Bundestag.

He was openly gay.

All content from Kiddle encyclopedia articles (including the article images and facts) can be freely used under Attribution-ShareAlike license, unless stated otherwise. Cite this article:
Guido Westerwelle Facts for Kids. Kiddle Encyclopedia.