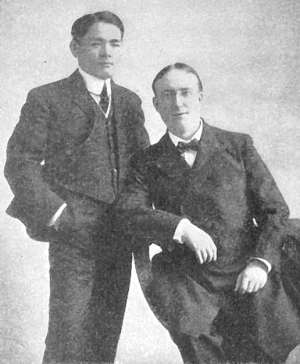 Harrie Irving Hancock (January 16, 1868 – March 12, 1922) was an American chemist and writer, mainly remembered as an author of children's literature and juveniles in the late 19th and early 20th centuries, and as having written a fictional depiction of a German invasion of the United States.

A prolific author who liked to work at night, Hancock wrote for the New York Journal, the New York World, and Leslie's Weekly. Much of his writing was the kind of "Boy's books" initiated by the famous Stratemeyer Syndicate, based on the assumption (which proved hugely successful) that "boys want the thrill of feeling 'grown-up'" and that they like books which give them that feeling to come in series where the same heroes appear again and again. However, the bulk of Hancock's works in that genre appear to have been handled by publishers other than Stratemeyer. (A comprehensive list of his publications does not yet exist, the list appearing on this page being far from complete).

For some time it was considered that, unlike other writers, he invariably used his own name, in the form "H. Irving Hancock". However, Edward T. LeBlanc and J. Randolph Cox, who researched the period's "dime novels", concluded that a series of books attributed to "Douglas Wells" were in fact written by Hancock.

The same researchers recount that Hancock "had been a journalist for the Boston Globe from 1885 to 1890, served as a war correspondent in Cuba and the Philippines during the Spanish–American War. He produced more than 50 serials for Norman Munro's juvenile magazine Golden Hours between 1889 and 1901.

His output included westerns, detective stories (set in New Orleans and in Asia), and historical adventures. China and Japan were the setting of such stories as 'The Great Tan-To; or Dick Brent's Adventures in Up-to-Date Japan'." Hancock was, however, charged with perpetuating racial stereotypes in his depiction of the Chinese "Supervillain" Li Shoon in a series of stories published between 1915 and 1917".

Hancock's experience as a war correspondent provided inspiration for books about the Spanish–American War. He also published books on physical fitness and an Encyclopedia of Knowledge and Manners, and served as the editor of a "History of West Point". In a magazine article he warned of the dangers of smoking, at a time when such dangers were not widely known. He was also apparently a sports writer and an early Western expert on Jiu-Jitsu.

Much of Hancock's writing had a patriotic character, his books and stories having a considerable proportion of military heroes placed in settings ranging from the American Revolutionary War, through the Spanish–American War and the First World War, and up to an imaginary German invasion of the United States (see following section).

In addition to his writing activity, Hancock organized the Ferguson-Hancock Laboratories together with Prof. George A. Ferguson in 1908.

Despite the enormous amount of material published by Hancock, some of his biographical details are not completely clear. The 1920 United States Federal Census contains the following: "H. Hancock, Birth: abt 1868 – Massachusetts Residence: 1920 – Brookhaven, Suffolk, New York". This seems to refer to Harrie Irving Hancock, but it is not completely certain—hence the above question mark following the date of his birth.

According to Gene Horton of Blue Point, Hancock is buried in an unmarked grave at the Blue Point Cemetery.

One Hancock book still in print is The Complete Kano Jiu-Jitsu, co-authored with Katsukuma Higashi and originally published by G. P. Putnam & Sons in 1905 in New York (presently republished by Dover Publications).

"The Invasion of the United States"

Further information: Imperial German plans for the invasion of the United States

Hancock's four-book series The Invasion of the United States, published in 1916, depicted a fictional invasion of the United States by Germany in 1920–21—reflecting, and to some degree helping to intensify, the shift of American public opinion towards getting involved in the First World War. It was an American representative of the subgenre known as invasion literature which originated in Britain and was frequent in the early Twentieth Century. This kind of books were credited—by some politicians at the time and by historians and researchers later—with intensifying bellicose public attitudes in various countries and contributing to escalation and war.

The series may have been influenced by William Le Queux's The Great War in England in 1897 (1894) in which the French launch a surprise invasion of England and penetrate into the heart of London but are finally defeated after much desperate and heroic fighting by the British protagonists. The book was highly popular in the early Twentieth Century, and Hancock is likely to have read it.

In Hancock's far more extensive version, constituting no less than four books, it is the Germans who launch a surprise attack in 1920, capture Boston despite heroic resistance by "Uncle Sam's boys", overrun all of New England and New York and reach as far as Pittsburgh—but are at last are gloriously crushed by fresh American forces. From the present-day point of view, it can be considered as "retroactive" alternate history.

Hancok's plot has a basic implausibility in that it assumes either an overwhelming German victory over the British, giving them mastery of the seas, or a British "friendly neutrality" and a free hand to invade America. Further, it assumes the German Navy to be capable of utterly defeating the US Navy, followed by ferrying no less than a million German troops across the Atlantic and keeping them supplied for years-long hard fighting. The experience of the first two years of the actual war, at the time of writing, already conclusively proved the Kaiserliche Marine manifestly incapable of anything remotely of the kind. In actuality it was US soldiers who—a year after the story's publication—would pour across a British-dominated Atlantic to assault Germany in Europe.

However, alternate history writer and analyst Dale Cozort notes that "(...)The broad outline of the war [depicted] is so much like what actually happened between Germany and Russia 25 or so years later, in World War II, that it's almost uncanny. The Germans win battle after battle but the opposition moves industry out of their reach, builds up overwhelming superiority in manpower and strategic mobility, then cuts off the cream of the German army. Sounds a lot like Eastern Front World War II up through Stalingrad". Cozort also notes that Hancock's is one of the first fictional depictions of war to make reference to tanks.

Hancock appears to have been among the first American writers to graphically describe their country being devastatingly invaded by powerful enemies—reflecting the disruption of the hitherto dominant American isolationist mindset. In later decades he was followed by a host of others depicting the US being fictionally invaded by Nazi Germany, Imperial Japan, the Soviet Union and China, as well as a considerable array of extraterrestrial aliens (see Invasion literature, Yellow Peril, Earth in fiction, The Man in the High Castle, The Ultimate Solution). In effect, this subgenre went full circle with the alternative history novel 1901 by Robert Conroy, depicting a fictitious invasion of the United States by Kaiser Wilhelm's Germany in the title year, bearing quite a bit of resemblance to Hancock's work.

Many of Hancock's books also appeared in the Street and Smith's "Bound to Win" series (see the following).

In the Street and Smith's "Bound to Win" series

Note: many of the above books were reprinted by the Saafield Company, after the Henry Altemus Company failed. The Saafield editions are on high acid content paper, and few surviving copies are in good condition. The Altemus books are far superior in quality.

The Invasion of the United States Series

The Ogilive books are stated to have been part of a yearly subscription service, The Sunset Series (cost $9.00).

All content from Kiddle encyclopedia articles (including the article images and facts) can be freely used under Attribution-ShareAlike license, unless stated otherwise. Cite this article:
H. Irving Hancock Facts for Kids. Kiddle Encyclopedia.