Kids Encyclopedia Facts
This page is about the Royal Navy base in Plymouth, England. For the Royal New Zealand Navy base in Auckland, New Zealand, see Devonport Naval Base.
"HMS Drake (shore establishment)" redirects here. For ships with the same name, see HMS Drake.

Her Majesty's Naval Base, Devonport (HMNB Devonport) is one of three operating bases in the United Kingdom for the Royal Navy (the others being HMNB Clyde and HMNB Portsmouth) and is the sole nuclear repair and refuelling facility for the Royal Navy. The largest naval base in Western Europe, HMNB Devonport is located in Devonport, in the west of the city of Plymouth, England.

The base began as Royal Navy Dockyard in the late 17th century, but shipbuilding ceased at Devonport in the early 1970s, although ship maintenance work has continued. The now privatised maintenance facilities are operated by Babcock International Group, who took over the previous owner Devonport Management Limited (DML) in 2007. DML had been running the Dockyard since privatisation in 1987.

From 1934 until the early 21st century the naval barracks on the site was named HMS Drake (it had previously been known as HMS Vivid after the base ship of the same name). The name HMS Drake and its command structure has been extended to cover the entire base. The barracks buildings are now named the Fleet Accommodation Centre. In the early 1970s the newly styled 'Fleet Maintenance Base' was itself commissioned as HMS Defiance; it remained so until 1994, when it was amalgamated into HMS Drake.

HM Naval Base Devonport is the home port of the Devonport Flotilla which includes the Trafalgar-class submarines. In 2009 the Ministry of Defence announced the conclusion of a long-running review of the long-term role of three naval bases. Devonport would no longer be used as a base for attack submarines after these moved to Faslane by 2017, and the Type 45 destroyers are based at Portsmouth. However, Devonport retains a long-term role as the dedicated home of the amphibious fleet, survey vessels and half the frigate fleet. 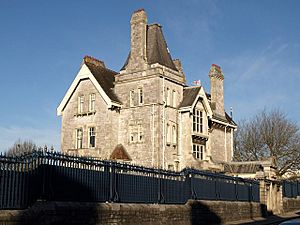 In 1588, the ships of the English Navy set sail for the Spanish Armada through the mouth of the River Plym, thereby establishing the military presence in Plymouth. Sir Francis Drake is now an enduring legacy in Devonport, as the naval base has been named HMS Drake. 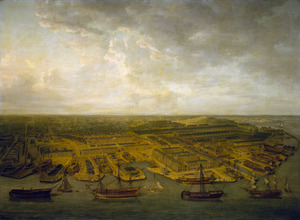 Plymouth Dockyard in 1798, by Nicholas Pocock. Centre front is Dummer's 1690s stone basin and dock: to its left, one double and two single dry docks; to its right, the 1761 double quadrangle storehouse. Behind the docks: pedimented workshops and the 1691 officers' terrace. On the right of the picture: building slips on the foreshore, with the smithery, timber stores, mast and boat houses beyond; then the long 1760s roperies and Mount Wise in the distance.

In 1689 Prince William of Orange became William III and almost immediately he required the building of a new Royal Dockyard west of Portsmouth. Edmund Dummer, Surveyor of the Navy, travelled the West Country searching for an area where a dockyard could be built; he sent in two estimates for sites, one in Plymouth, Cattewater and one further along the coast, on the Hamoaze, a section of the River Tamar, in the parish of Stoke Damerel. Having dismissed the Plymouth site as inadequate, he settled on the Hamoaze area which soon became known as Plymouth Dock, later renamed Devonport. On 30 December 1690, a contract was let for a dockyard to be built: the start of Plymouth (later Devonport) Royal Dockyard. Having selected the location, Dummer was given responsibility for designing and building the new yard.

At the heart of his new dockyard, Dummer placed a stone-lined basin, giving access to what proved to be the first successful stepped stone dry dock in Europe. Previously the Navy Board had relied upon timber as the major building material for dry docks, which resulted in high maintenance costs and was also a fire risk. The docks Dummer designed were stronger with more secure foundations and stepped sides that made it easier for men to work beneath the hull of a docked vessel. These innovations also allowed rapid erection of staging and greater workforce mobility. He discarded the earlier three-sectioned hinged gate, which was labour-intensive in operation, and replaced it with the simpler and more mobile two-sectioned gate. A further, double-dock (i.e. long enough to accommodate two ships of the line, end to end) was added, just north of the basin, in the 1720s.

Dummer wished to ensure that naval dockyards were efficient working units that maximised available space, as evidenced by the simplicity of his design layout at Plymouth Dock. He introduced a centralised storage area (the quadrangular Great Storehouse) alongside the basin, and a logical positioning of other buildings around the yard. The southern boundary of his yard was formed by a 'double' rope-house (combining the previously separate tasks of spinning and laying within a single building); the upper floor was used for the repair of sails and a separate rigging house stood nearby. The smithery with its fire and forge was positioned to the north, safely separate from the other buildings. On high ground overlooking the rest of the yard he built a grand terrace of thirteen three-storey houses for the senior dockyard officers (the first known example in the country of a palace-front terrace); the commissioner was accommodated in the centre, and at each end of the terrace was a two-storey block of offices (one for the commissioner, the other for the Clerk of the Cheque). A chapel was built in 1700, alongside the Porter's Lodge at the main gate (it was destroyed by a fire in 1799).

Most of these buildings and structures were rebuilt over ensuing years, including Dummer's original basin and dry dock (today known as No. 1 Basin and No. 1 Dock). The terrace survived into the 20th century, but was largely destroyed in the Blitz along with several others of Devonport's historic buildings. Just one end section of the terrace survives; dating from 1692 to 1696, it is the earliest surviving building in any royal dockyard.

Ships based at the port are known as the Devonport Flotilla. This includes the Navy's assault ships HMS Albion and HMS Bulwark. It also serves as home port to most of the hydrographic surveying fleet of the Royal Navy and seven Type 23 frigates. In 2018 the Defence Secretary announced that the proposed new Type 26 frigates would all be based at Devonport. 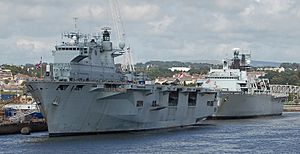 Ocean (decommissioned) berthed ahead of Albion in Devonport Dockyard 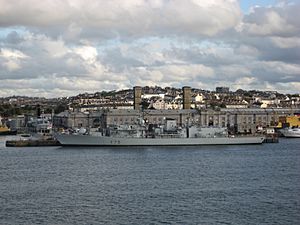 In changes to base porting arrangements announced in November 2017, HM Ships Argyll, Monmouth and Montrose will join the Portsmouth Flotilla; HM Ships Westminster, Richmond, Kent and St Albans will move in the opposite direction. Richmond becomes a Devonport ship on completion of her refit. St Albans moved to Devonport in July 2019 in preparation for her major refit. 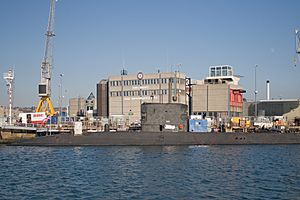 HMS Talent at the Fleet Maintenance Base 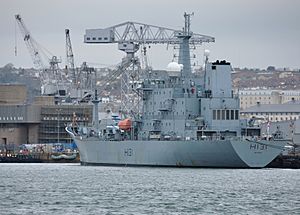 Other units based at Devonport

Thirteen out of service nuclear submarines were stored at Devonport in 2018.

In 2018, the UK Parliament's Public Accounts Committee criticised the slow rate of decommissioning of these submarines, with the Ministry of Defence admitting that it had put off decommissioning due to the cost. The National Audit Office in 2019 stated that the costs of laid up storage of all nuclear submarines had reached £500 million, and they represent a liability of £7.5 billion. 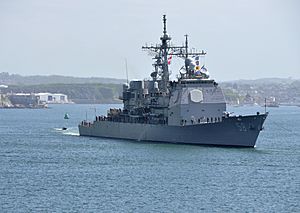 The Naval base at Devonport is still nicknamed "Guzz" (or, sometimes, "Guz") by sailors and marines. One suggestion is that this originates from the word guzzle (to eat or drink greedily), which is likely to refer to the eating of cream teas, a West Country delicacy and, therefore, one with strong connections to the area around Plymouth. Another explanation advanced is that "GUZZ" was the radio call sign for the nearby Admiralty wireless station (which was GZX) at Devil's Point, though this is disputed and has recently been disproved by reference to actual wireless telegraphy callsigns in existence over the past century.

Another explanation is that the name came from the Hindi word for a yard (36 inches), "guz", (also spelled "guzz", at the time) which entered the Oxford English Dictionary, and Royal Navy usage, in the late 19th century, as sailors used to regularly abbreviate "The Dockyard" to simply "The Yard", leading to the slang use of the Hindi word for the unit of measurement of the same name. The Plymouth Herald newspaper attempted to summarise the differing theories, but no firm conclusion was reached. Charles Causley referred to Guz in one of his poems, "Song of the Dying Gunner A.A.1", published in 1951.

A "tiddy oggy" is naval slang for a Cornish Pasty and which was once the nickname for a sailor born and bred in Devonport. The traditional shout of "Oggy Oggy Oggy" was used to cheer on the Devonport team in the Navy's field gun competition.

Devonport has been the site of a number of leaks of nuclear waste associated with the nuclear submarines based there.

Commissioners of the Navy

Up until 1832 the Plymouth Royal Dockyard, was administered by a Commissioner of the Navy on behalf of the Navy Board in London included:

By An Order in Council dated 27 June 1832 the role of the commissioner was replaced by an admiral-superintendent.

Admiral Superintendents of the yard

In 1832 the Navy Board was abolished, everything except the gun wharves were brought under the direct control of the Admiralty. A serving Royal Navy officer, usually of rear-admiral rank, was appointed as admiral-superintendent of the dockyard; however, the post was sometimes held by a commodore-superintendent or even a vice-admiral. They were responsible for all the civilian support services operated by the dockyard departments.

On 30 December 1970, Vice-Admiral J R McKaig CBE was appointed as Port Admiral, Her Majesty's Naval Base, Devonport, and Flag Officer, Plymouth. On 5 September 1971, all Flag Officers of the Royal Navy holding positions of Admiral Superintendents at Royal Dockyards were restyled as Port Admirals.

Several establishments were set up in the vicinity of Devonport and Plymouth in direct relationship either to the Royal Dockyard or to Plymouth's use as a base for the Fleet, including:

All content from Kiddle encyclopedia articles (including the article images and facts) can be freely used under Attribution-ShareAlike license, unless stated otherwise. Cite this article:
HMNB Devonport Facts for Kids. Kiddle Encyclopedia.