Helvick or Helvick Head (Irish: Heilbhic, Ceann Heilbhic) is a headland on the southern end of Dungarvan Harbour, Ireland; it is the eastern tip of the Ring Peninsula.

Formed of Old Red Sandstone, it is the easternmost protrusion of a ridge that begins near Cork City. 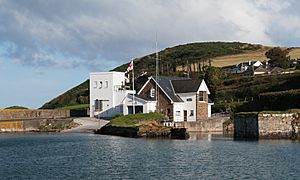 Helvick is one of very few Irish place names derived from the Old Norse of the Viking sailors who patrolled these coasts in the Middle Ages. The second part, -vík, means "bay" (cf. Smerwick); the meaning of the first part is unclear, but it may mean "healthy", "white", "holy", or "safe"; compare with Hellvik, Norway.

Helvick Head is a Special Area of Conservation (SAC). The cliffs are a nesting site for seabirds including choughs and shag. Other bird species include razorbill, Northern fulmar, peregrine falcon, black-legged kittiwake, black guillemot, and common murre (guillemot).

All content from Kiddle encyclopedia articles (including the article images and facts) can be freely used under Attribution-ShareAlike license, unless stated otherwise. Cite this article:
Helvick Facts for Kids. Kiddle Encyclopedia.