Hendrik A. Lorentz facts for kids

Hendrik Antoon Lorentz (18 July 1853 – 4 February 1928) was a Dutch physicist who shared the 1902 Nobel Prize in Physics with Pieter Zeeman for the discovery and theoretical explanation of the Zeeman effect.

Hendrik Lorentz was born in Arnhem, Gelderland (The Netherlands), the son of Gerrit Frederik Lorentz (1822–1893). In 1862, after his mother's death, his father married Luberta Hupkes. 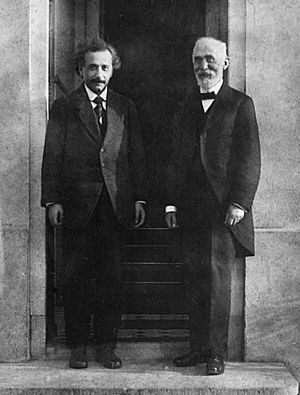 Albert Einstein and Hendrik Antoon Lorentz, photographed by Ehrenfest in front of his home in Leiden in 1921.

In 1905, Einstein would use many of the concepts to write his paper entitled "On the Electrodynamics of Moving Bodies", known today as the theory of special relativity. Because Lorentz laid the fundamentals for the work by Einstein, this theory was originally called the Lorentz-Einstein theory.

Lorentz was one of few scientists who supported Einstein's search for general relativity from the beginning – he wrote several research papers and discussed with Einstein personally and by letter. For instance, he attempted to combine Einstein's formalism with Hamilton's principle (1915).

In January 1928, Lorentz became seriously ill, and died shortly after on February 4.

All content from Kiddle encyclopedia articles (including the article images and facts) can be freely used under Attribution-ShareAlike license, unless stated otherwise. Cite this article:
Hendrik A. Lorentz Facts for Kids. Kiddle Encyclopedia.