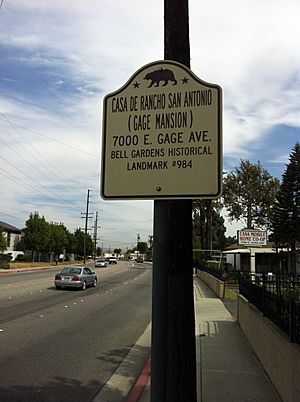 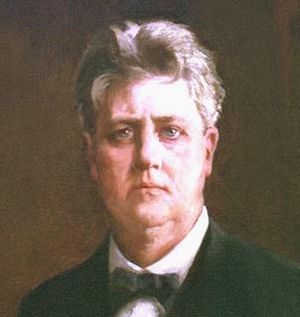 The Henry Gage Mansion also called the Casa de Rancho San Antonio is the oldest remaining house in Los Angeles county. The Henry Gage Mansion was complete in 1810 and is currently located in the city of Bell Gardens, California. Henry Gage Mansion is a historic home that was designated a California Historic Landmark (No. 984) on May 26, 1989. Attorney Henry Tifft Gage was gifted the home in 1880. He, his wife Margaret and the Gage family lived in the home from 1883 to 1924. Henry Gage was voted in as the Governor of California in 1899 and served till 1903. The previous owner of the home was the Lugo family. Francisco Salvador Lugo and his son Antonio María Lugo began construction in 1795 on Casa de Rancho San Antonio on the land called Rancho San Antonio. Antonio Lugo served as the Alcalde (Mayor) of Los Angeles. The house is located at 7000 East Gage Avenue in Bell Gardens. It was built to qualify the younger Lugo, a former Spanish colonial soldier, for a land grant from the Spanish crown. In 1810, Antonio María Lugo completed the house and received the grant, naming his new grant Rancho San Antonio. The ranch eventually grew to encompass 29,513 acres (119.43 km2), including what are now the cities of Bell Gardens, Commerce, and parts of Bell, Cudahy, Lynwood, Montebello, South Gate, Vernon and East Los Angeles. When California became part of the U.S. in 1850, Lugo, as did all recipients of Spanish/Mexican land grants, began losing portions of his land to the growing population of Anglo newcomers. The ranch adobe, however, continued to be owned and used by the Lugo family.

By 1865, most of the Lugo ranch, divided among five sons and three daughters, had been sold off for as little as a dollar per acre. The original adobe ranch home, however, remained in the family. In 1880, Henry Gage, a transplant from Michigan, married one of Lugo's great granddaughters, Francis "Fanny" Rains. The original adobe ranch home was gifted to Gage as a wedding dowry and it became known as the Gage Mansion. When Gage acquired the mansion he worked very extensively to restore the heritage farmhouse of early Los Angeles. In 1898, Gage was elected to become the 20th governor of California. He served in that office from 1899 to 1903. In 1910, he was appointed by President William Howard Taft to serve as U.S. Minister to Portugal. He resigned after only one year due to his wife's health problems. Gage lived in the abode ranch house until his death in 1924.

Bell Gardens maintains only a small portion of the original Lugo land grant, which is located at the site of the Casa Mobile home Park at 7000 Gage Ave. In 1991, the park's tenants, who own the land as well as Lugo's original dwelling, were successful in their efforts to have Casa de San Antonio named State Historical Monument No. 984. Their effort ensures that Don Antonio Maria Lugo's name and his historic home will be preserved for future generations of Bell Gardens residents and Californians. 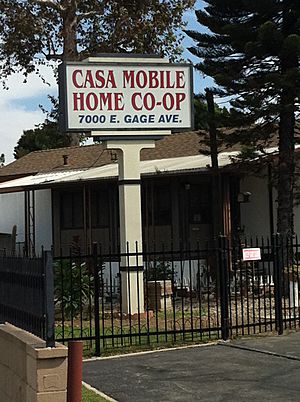 A century later, the Gage Mansion was all that remained of the once great Rancho San Antonio. In 1983 the Casa Mobile Home Park, a cooperative of mobile home owners renting lots on the property, purchased the land and the house from their ailing landlord. Although they were aware of the historical significance of the old house, they had no means of maintaining it. In 1987 Bell Gardens City Councilwoman Letha Viles began working to get the house listed on the state historical registry, making it eligible for maintenance grants. The Avila Adobe, built in 1818 and located on Olvera Street, is the oldest remaining house in the City of Los Angeles.

All content from Kiddle encyclopedia articles (including the article images and facts) can be freely used under Attribution-ShareAlike license, unless stated otherwise. Cite this article:
Henry Gage Mansion Facts for Kids. Kiddle Encyclopedia.