The federal government also has a separate heritage register for buildings it owns, under the Federal Heritage Buildings program. In Edmonoton, three buildings are listed: the Grierson Centre's, former RCMP Centre Building 3 (now a prison), and two buildings at CFB Edmonton, the Headquarters Army Western Command Building J3 at Edmonton Garrison, and the Spall Block, Building h-14 at Griesbach. 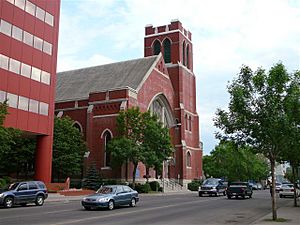 First Presbyterian Church was completed in 1912 and designated a Provincial Historic Resource in 1978. 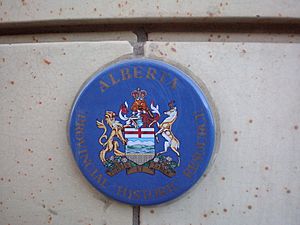 This plaque from the McLeod Building, signifies a Provincial Historic Resource. 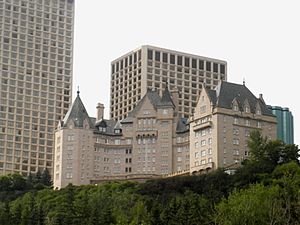 The Hotel Macdonald opened in 1915 and became a Municipal Historic Resource in 1984.

The City of Edmonton maintains the "Register of Historic Resources in Edmonton" which has several different categories of buildings and sites: Municipal Historic Resources (76 sites), A-List Resources (190 sites), and B-List Resources (305 sites), for a total of 571 sites on the register. Sites can be put on the Register, which is simply a list of buildings the city deems "historic," by the City's staff at any time without the knowledge of the owner or city council. However the owner must be notified and city council must vote to approve designating a building as a Municipal Historic Resources. Only Municipal Historic Resources are protected from demolition. In addition to this the City publishes a list of historic resources that were demolished after being added to the register. In the last report 27 historic buildings were listed as demolished. As an appendix to the Register, the City also lists all buildings at the municipal Fort Edmonton Park museum, and historically significant landscapes, cemeteries and monuments, street furnishings, and architectural fragments.

All content from Kiddle encyclopedia articles (including the article images and facts) can be freely used under Attribution-ShareAlike license, unless stated otherwise. Cite this article:
Heritage buildings in Edmonton Facts for Kids. Kiddle Encyclopedia.