Hermantown is a city in Saint Louis County, Minnesota, United States. The population was 9,414 at the 2010 census. A suburb of Duluth, Minnesota, it has been the only city in the county to report population growth as much of the area's residential and commercial expansion occurs there. Hermantown is located near the tip of Lake Superior.

The eastern part of Hermantown has an appearance typical of a lower-density bedroom community, with large, leafy lots and occasional subdivisions. The car-oriented "Miller Hill area", or Miller Trunk Corridor of Duluth, has sprawled well past the city boundary line into this part of Hermantown. The western part of Hermantown is dominated by a more rural landscape, reminiscent of the past agricultural focus of the city. Hermantown's motto is "The City of Quality Living ".

Hermantown's current mayor is Wayne Boucher, who won a 2008 election against opponent Susie Stockinger. Mayor Boucher ran unopposed for a second mayoral term in 2012 and received 4,111 votes. There were 79 write-ins for mayor during the 2012 election. 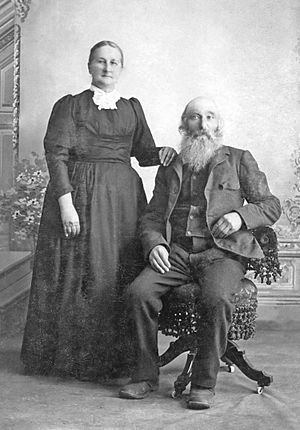 The first inhabitants of the area were Native Americans. They lived in the area often referred to in early Duluth references as "the land up over the hill."

In 1867, August Kohlts and his friend, Lambert "Pat" Acker, filed for homesteads in Section 18, Township 50 North, Range 15 West. Both families had emigrated from Prussia. Acker arrived about age five with his parents and siblings around 1835 and settled in Erie County, New York. He married Emelie Louisa Wilke on January 12, 1850. Kohlts and his wife, Emilie, immigrated in the spring of 1860. The Kohlts and Ackers resided in the town of Tonawanda on the Niagara River for some years with many other Germans who settled in the area. Citizenship was granted to Kohlts on March 20, 1868. Soon afterward, the Kohlts and Acker families set out from Buffalo, New York, heading west via the Great Lakes for the Hancock, Michigan area of the Keewenaw Peninsula and its copper mines.

Perhaps lured by the availability of free land under the Homestead Act, the Kohlts family left for Minnesota. The federal census of June 1, 1870 records their presence in the Second Ward of the newly formed city of Duluth, Minnesota, while the Acker family arrived in Duluth in 1871. By January 1872 August Kohlts had established an 82-acre site in the wilderness outside Duluth. He and Acker were the first settlers in the area now known as Hermantown.

In the years that followed, Kohlts and Acker alternated between working in the young town of Duluth and clearing land at their rural homesteads on what is now Five Corners Road in Hermantown. They traveled between Duluth and their homesteads on a Native American trail that would later become Piedmont Avenue and the Hermantown Road.

Hermantown's population would get a boost from a new wave of homesteaders just before World War II. During the hard times of the Great Depression, the federal government built nearly a hundred "subsistence homestead" projects designed to move people trapped in poverty in the cities, to new homes in rural or suburban locations. One of the two Minnesota projects was assigned to Hermantown.

The Jackson Project was completed in 1937. It is one of Hermantown's more interesting features, and is the proliferation of "Jackson Homes" on certain roadways. These single-family dwellings were built during the Great Depression as subsistence homesteads. Many today retain their original brick appearance, albeit with additions. Each of the 84 homesteads had a brick veneer farmhouse; half also had a garage-barn combination. Each had five or 10 acres (40,000 m2) of land, and the family also received a pig, a cow, and 35 chickens. The idea was that the family would be able to raise its own food and use the profits from selling any surplus to work off its debt to the government. The units were sold to homesteaders on very liberal terms: the average price for the home and property was $2,687.40 plus interest.

The Jackson Project was one of the later projects built, which was a benefit because the quality of housing improved. Plumbing and electricity were now required in all homes. The homesteaders gave a whole new profile to what was then Herman Township. Now with 84 homes and families concentrated in one part of the community, the Project marked the start of a transition from rural to suburban for Hermantown.

Hermantown was incorporated as a city on December 31, 1975.

The community of Adolph is located within the southwest corner of the city of Hermantown.

The Midway River rises in Hermantown and flows generally southwest through the central and southwest portions of the city before entering adjacent Midway Township. The Midway River flows into the Saint Louis River in Thomson Township near Cloquet.

There were 3,355 households of which 33.1% had children under the age of 18 living with them, 58.4% were married couples living together, 7.5% had a female householder with no husband present, 4.2% had a male householder with no wife present, and 29.9% were non-families. 23.5% of all households were made up of individuals and 12.5% had someone living alone who was 65 years of age or older. The average household size was 2.55 and the average family size was 3.01.

There were 2,726 households out of which 37.9% had children under the age of 18 living with them, 64.9% were married couples living together, 8.3% had a female householder with no husband present, and 23.8% were non-families. 19.8% of all households were made up of individuals and 8.6% had someone living alone who was 65 years of age or older. The average household size was 2.67 and the average family size was 3.08.

All content from Kiddle encyclopedia articles (including the article images and facts) can be freely used under Attribution-ShareAlike license, unless stated otherwise. Cite this article:
Hermantown, Minnesota Facts for Kids. Kiddle Encyclopedia.