Hillsborough, County Down facts for kids

Kids Encyclopedia Facts
This page is about the village in County Down. For other uses, see Hillsborough. 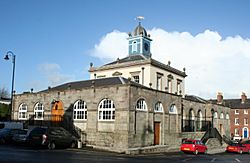 Hillsborough is a village, townland and civil parish in County Down, Northern Ireland, situated 19 km (12 mi) from the city of Belfast. It is within the Lisburn and Castlereagh District Council area.

The historic centre of the village contains significant amounts of Georgian architecture. The village was originally a compact settlement hosting a regular market. More recently land to the north of the village has been developed as housing and Hillsborough has become part of the commuter belt of Belfast. In recent years townhouses and apartments have been built closer to the centre of the village, and the former civic building of Lisburn Borough Council has been converted to residential use. That building is in twentieth century neo-Georgian style. Development to the east of the village is continuing to swell Hillsborough's population. The associated settlements of Culcavy and Aghnatrisk to the north-west are also growing.

A prominent feature of the east and south approaches to Hillsborough is a 5-mile wall which encloses the "Park Dam", an artificial lake, and the forest surrounding it.

In 2007 Hillsborough won 3rd place in the Ulster in Bloom large village competition.

Before 1661, the townland was known as Crumlin or Cromlin (from Irish Cromghlinn, meaning 'crooked glen'). By 1661 the townland and the settlement within it had been renamed Hillsborough. It was named after Sir Arthur Hill, who built Hillsborough Fort in 1650 to command the road from Dublin to Carrickfergus. The Hill family became the Earls of Hillsborough, then Marquises of Downshire.

A prominent memorial to the 3rd Marquis of Downshire (and closely resembling Nelson's column in Trafalgar Square, London) stands to the south of the village and is visible throughout much of the surrounding area.

Hillsborough is classified as an intermediate settlement by the NI Statistics and Research Agency (NISRA) (i.e. with population between 2,250 and 4,500 people). On Census day (29 April 2001) there were 3,400 people living in Hillsborough. Of these: 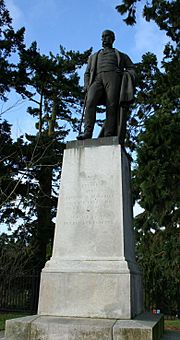 Monument to 4th Marquis of Downshire

All content from Kiddle encyclopedia articles (including the article images and facts) can be freely used under Attribution-ShareAlike license, unless stated otherwise. Cite this article:
Hillsborough, County Down Facts for Kids. Kiddle Encyclopedia.