While there are many historic spaces in Framingham, the Centre Common is the focal point for the town's past. Three of the town's most historic buildings on the Centre Common face "demolition by neglect." The Village Hall, the Edgell Memorial Library, and the Old Academy building not only house over 10,000 artifacts spanning four centuries of the town's history, but they are symbols of Framingham's commitment to educational excellence, civic engagement, and community pride.

One historic site is Shopper's World which opened on October 4, 1951 (as Shoppers' World), making it one of the earliest suburban shopping malls in the country.

Framingham, sited on the ancient trail known as the Old Connecticut Path, was first settled when John Stone settled on the west bank of the Sudbury River in 1647. In 1660, Judge Thomas Danforth, of the Salem Witch Trials fame, an official of the Bay Colony, formerly of Framlingham, Suffolk, received a grant of land at "Danforth's Farms" and began to accumulate over 15,000 acres (61 km2). He strenuously resisted petitions for incorporation of the town, which was officially incorporated in 1700, following his death the previous year. Why the "L" was dropped for the new town's name is not known. The first church was organized in 1701, the first teacher was hired in 1706, and the first permanent schoolhouse in 1716.

On February 22, 1775, the British general Thomas Gage sent two officers and an enlisted man out of Boston to survey the route to Worcester. In Framingham those spies stopped at Buckminster's Tavern. They watched the town militia muster outside the building, impressed with the men's numbers but not their discipline. Though "the whole company" came into the tavern after their drill, the officers managed to remain undetected and continued on their mission the next day. Gage did not order a march along that route, instead ordering troops to Concord on April 18-19. Framingham sent two militia companies totaling about 130 men into the Battles of Lexington and Concord that followed; one of those men was wounded.

Framingham has several properties listed in the U.S. National Register of Historic Places These meet standards of significance at a national level, for architecture, association with historic events or people, and so on. 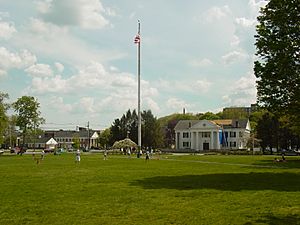 All content from Kiddle encyclopedia articles (including the article images and facts) can be freely used under Attribution-ShareAlike license, unless stated otherwise. Cite this article:
Historic places in Framingham, Massachusetts Facts for Kids. Kiddle Encyclopedia.