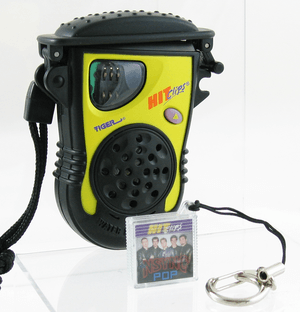 Hilary Duff became the spokesperson for HitClip in 2003. In 2004 she was succeeded by Raven when the format was changed into a 2-minute mini circular cartridge. At that point 30 million units had been sold.

The songs that were on the HitClips cartridge in 2000–2003 before HitClips disc came along.

All content from Kiddle encyclopedia articles (including the article images and facts) can be freely used under Attribution-ShareAlike license, unless stated otherwise. Cite this article:
HitClips Facts for Kids. Kiddle Encyclopedia.