The Hunnewell Estates Historic District is an historic district between the Charles River and Lake Waban in Wellesley and Natick, Massachusetts, about 17 miles west of Boston. It consists of the large group of 18th to 21st century agricultural and estate properties with farmland, gardens, residences, and landscapes of the Hunnewell and Welles families. The properties in the Historic District are still largely owned and occupied by members of the Hunnewell family. It was added to the National Register of Historic Places in 1988.

All of the properties within the district are private residences, and are not open to the public. 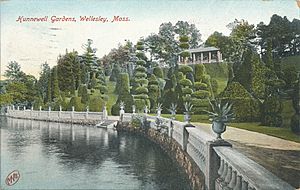 Topiary 'Italian Garden' on the H.H. Hunnewell estate circa 1909.

The origin of the Hunnewell estates dates to 1763 when Samuel Welles (1725-1799) made his first purchase of Indian lands in Natick and West Needham (later Wellesley). Welles was a descendant of Thomas Welles (1594-1660), 1st Treasurer and then Governor of the Colony of Connecticut. The properties descended to Samuel's granddaughter Isabella Pratt Welles and her husband, successful railroad financier and businessman, landscape designer, and horticulturalist H. Hollis Hunnewell (1810-1902), and continued with their adult children and the following generations. Mr. Hunnewell and his family gave much to the town of Wellesley (formerly West Needham), which was named after his wife's family - the Welles, and to Boston, with civic philanthropy in numerous fields.

They also were generous to the New England horticulture community for over 75 years via importing, testing, and distributing many new plant introductions, estate site planning and garden design examples, and supportive leadership in the Massachusetts Horticultural Society. Horatio Hollis Hunnewell was especially interested in coniferous and broad-leaved evergreens, and Asian rhododendrons.

At their peak during the early 20th century 'American Country Place' era, there were twenty contiguous Hunnewell estates along Washington Street and Pond Road in southwest Wellesley. The estates have now been in the Welles-Hunnewell family for eight generations.

The family has placed hundreds of acres in the district under perpetual conservation restrictions, primarily with The Trustees of Reservations, protecting Lake Waban and the Charles River, as well as the farmland, gardens, landscapes, vistas, and natural native landscapes from development. These restrictions, starting in 1974, were among the first placed with the Trustees of Reservations.

The district includes the original Welles homestead, the Hunnewell Farm, and the eight contiguous country houses and outbuildings H. H. Hunnewell built for himself and seven of his nine children:

All content from Kiddle encyclopedia articles (including the article images and facts) can be freely used under Attribution-ShareAlike license, unless stated otherwise. Cite this article:
Hunnewell Estates Historic District Facts for Kids. Kiddle Encyclopedia.