The iPod nano is a MP3 player made by Apple Inc. It is available in 8GB and 16GB memory, in nine colours: silver, grey, purple, blue, green, yellow, orange, red, and pink.

There is a built-in FM receiver inside the iPod nano, and with the radio app, radio from the FM channels can be listened to. There is also a feature called Live Pause which allows listeners to pause the radio stream, and resume it at the same place later.

The iPod nano can 'talk to you', using a feature called VoiceOver. When the button on the headphones or the Click Wheel is held down, VoiceOver will speak the song currently playing and its artist. This feature is available in 20 languages.

The iPod nano has a built-in pedometer. You can create a Daily Step goal, or use the 'Always On' setting so it counts all of your steps.

Using the Nike+iPod sport kit, the iPod nano can be used as a fitness aid. It can measure your run by fitting into the insole Nike+ shoe pocket, then it can sync it to nikeplus.com. Nike+ is also compatible with some exercise machines.

The iPod nano includes a video camera which can be used to capture video. You can add fifteen video effects, then upload it to YouTube, MobileMe, or Facebook with your computer. 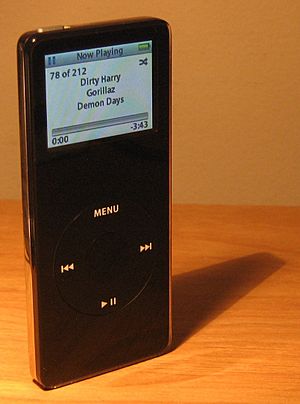 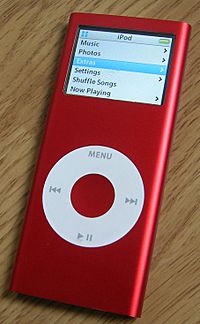 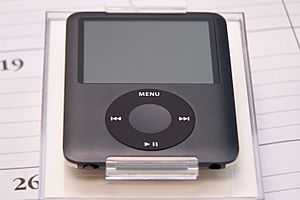 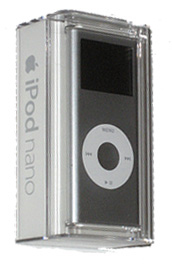 The size of the package was reduced 50 percent with the introduction of the 2nd generation. The 4th and 5th generation[packaging mimics this packaging, while the 3rd generation used a larger but otherwise similar version of it

The third generation iPod Nano was released on September 5, 2007. It had a new smaller and wider design, video playback ability and a new user interface.

The iPod Nano fourth generation was released on September 9, 2008 and changed back to the body shape used in the first and second generation models.

The six old colors (silver, black, mint, turquoise, berry red and rose pink were replaced with silver, black, purple, light blue, green, yellow, orange, red and pink. But the Product Red iPod could only be bought on the Apple website and retail stores. An accelerometer was also added to the iPod Nano. Because of this, you could turn the shuffle songs feature on and off by shaking it, go through the cover flow when you put the iPod on it's side and look at pictures portrait or landscape. But videos could only be watched in landscape. Because of the accelerometer feature, the Quiz game was removed and a new Maze game was added.

The iPod Nano fifth generation was released on September 9, 2009 and had a smaller price than the last generation. At the time the 8GB Nano was $149 and the 16GB Nano $179. The screen was also bigger and some new colors were introduced: Silver, Black, Purple, Blue, Yellow, Orange, Product Red, Green and Pink though the yellow and Product Red iPods were only available at the Apple Website and retailers.

The fifth generation introduced a number of new things including a microphone, a pedometer, a video camera and an FM radio that had station frequencies coming from North and South America, Europe, Australia and New Zealand and Asia.

The sixth generation iPod Nano was released on September 1, 2010. It was a combination of the iPod Shuffle by the size and shape and the iPod Touch by the touch screen, a sleep/wake button and the user interface and icons. This iPod Nano however didn't have a video camera, the ability to play back videos, the voice-recorder, (though plugging in the headphones with a microphone would show a voice memos app) built in speaker and games. But it did still have a pedometer and an FM radio. The price for this iPod Nano was also the same GB models for the same prices as the previous generation Nano.