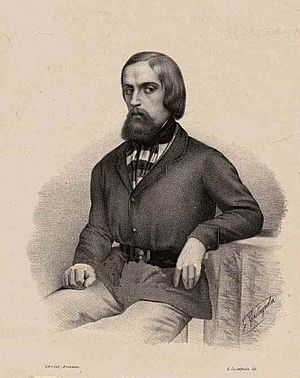 Goffredo Mameli, author of the anthem

Il Canto degli Italiani (The Song of the Italians) also known as Inno di Mameli (Mameli's Hymne, from the name of the author) and Fratelli d'Italia (Borthers of Italy, from the incipit) is the Italian national anthem.

The text was written by Goffredo Mameli in the autumn of 1847 in Genoa when he was 20-years-old. The words were later set to music by Michele Novaro in the same year. The hymn was successful during the Risorgimento because hopes in the unification of the Italy. After the unification (1861), however, was adopted the Marcia Reale, Savoy's official anthem. Il Canto degli Italiani became anthem of Italy after 1946, when Italy became repubblic.

All content from Kiddle encyclopedia articles (including the article images and facts) can be freely used under Attribution-ShareAlike license, unless stated otherwise. Cite this article:
Il Canto degli Italiani Facts for Kids. Kiddle Encyclopedia.