The Illinois Basin is a Paleozoic depositional and structural basin in the United States, centered in and underlying most of the state of Illinois, and extending into southwestern Indiana and western Kentucky. The basin is elongate, extending approximately 400 miles (640 km) northwest-southeast, and 200 miles (320 km) southwest-northeast. 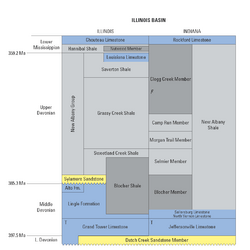 The major structural features within the basin include the La Salle anticlinal belt, the DuQuoin monocline, the Cottage Grove fault system, and the Fairfield Basin.

At its center beneath southern Illinois, the basin contains a thickness of about 15,000 feet of Cambrian through Pennsylvanian sedimentary rocks, predominantly marine, and mostly dolomite, limestone, shale, and sandstone.

The basement rocks deep below the sedimentary rocks of the basin are Proterozoic granites and rhyolite of the Eastern Granite–Rhyolite Province which dates to around 1.55 Ga.

The rocks of the Illinois Basin are sources of coal, petroleum, and other minerals.

Bituminous coal is present in Pennsylvanian rocks in the basin, deposited in freshwater swamp environments. Over the years, the Illinois Basin has produced more than eight billion tons of coal in Southern Illinois, particularly in the Harrisburg Coal Field, and the Western Coal Fields of Kentucky. Coal production was 99 million short tons in 2008, roughly equally divided between Illinois, Indiana, and western Kentucky. The basin provided 8% of US coal production in 2008. 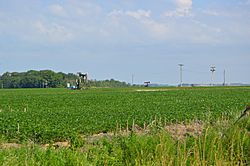 The rocks of the Illinois Basin are thought to be the source of metals in Mississippi Valley-Type lead-zinc deposits, both within the basin and in surrounding areas, such as the Lead Belt of southeast Missouri.

Within the basin, deposits valuable for lead, zinc, coal balls and fluorite are mined in Hardin and Pope counties, Illinois, and Crittenden and Livingston counties, Kentucky. the deposits are in the form of veins and limestone replacement deposits in Mississippian sedimentary rocks. Ore minerals are fluorite, galena, and sphalerite. Gangue minerals include common quartz and calcite, and minor barite and chalcopyrite.

Some geologic formations in the Illinois Basin are considered to have potential for carbon sequestration, as a permanent disposal site for carbon dioxide that would otherwise be released into the atmosphere. In 2009, Archer Daniels Midland Corp. began pilot testing the carbon sequestration potential of the Mt. Simon formation beneath its ethanol manufacturing facility in Illinois. As of January 2015, one million metric tons of carbon dioxide had been sequestered in the Illinois Basin-Decatur Project.

All content from Kiddle encyclopedia articles (including the article images and facts) can be freely used under Attribution-ShareAlike license, unless stated otherwise. Cite this article:
Illinois Basin Facts for Kids. Kiddle Encyclopedia.