The borough is a dry town where alcohol cannot be sold.

Island Heights was incorporated as a borough by an act of the New Jersey Legislature on May 6, 1887, from portions of Dover Township (now Toms River Township), based on the results of a referendum held on November 18, 1886.

Island Heights takes its name from two sources: it originally was an island. It is situated by a steep bluff rising 60 feet (18 m) above the Toms River. It was originally known as Doctor Johnson's island, being included in the patent granted to him in 1680. In the century before the American Revolutionary War, it was known as Dillon's Island, probably for James Dillon, a prominent man in Toms River. The land was purchased by John Imlay of Allentown, who sold it in 1794 to Issac Gulick. In 1797, Gulick and his wife Abagail sold it to Abraham and George Parker. In 1799, the Parker brothers sold it to Abel Middleton of Upper Freehold Township.

Unincorporated communities, localities and place names located partially or completely within the borough include Beechwood and Long Point.

There were 683 households out of which 25.0% had children under the age of 18 living with them, 57.0% were married couples living together, 10.0% had a female householder with no husband present, and 28.7% were non-families. 22.0% of all households were made up of individuals, and 9.2% had someone living alone who was 65 years of age or older. The average household size was 2.45 and the average family size was 2.88. 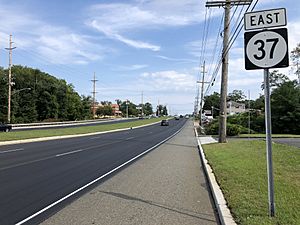 Route 37 eastbound along the north edge of Island Heights

NJ Transit offers seasonal bus service between the borough and the Port Authority Bus Terminal in Midtown Manhattan on the 137 route and to Newark on the 67 route.

The Island Heights School District serves public school students in kindergarten through sixth grade at Island Heights Elementary School. As of the 2018–19 school year, the district, comprised of one school, had an enrollment of 129 students and 13.2 classroom teachers (on an FTE basis), for a student–teacher ratio of 9.8:1. In the 2016–17 school year, Island Heights had the 14th-smallest enrollment of any school district in the state, with 126 students. Island Heights Elementary School was one of nine schools in New Jersey honored in 2020 by the National Blue Ribbon Schools Program, which recognizes high student achievement.

Public school students in seventh through twelfth grades attend the schools of the Central Regional School District, which also serves students from the municipalities of Berkeley Township, Ocean Gate, Seaside Heights and Seaside Park. As of the 2018–19 school year, the district, comprising two schools, had an enrollment of 2,272 students and 162.8 classroom teachers (on an FTE basis), for a student–teacher ratio of 14.0:1. Schools in the district (with 2018–19 enrollment data from the National Center for Education Statistics) are Central Regional Middle School with 769 students in grades 7 - 8 and Central Regional High School with 1,483 students in grades 9 - 12. The district's board of education consists of nine members, who are directly elected by the residents of the constituent municipalities to three-year terms of office on a staggered basis, with three seats up for election each year. Island Heights is allocated one of the board's nine seats.

People who were born in, residents of, or otherwise closely associated with Island Heights include:

All content from Kiddle encyclopedia articles (including the article images and facts) can be freely used under Attribution-ShareAlike license, unless stated otherwise. Cite this article:
Island Heights, New Jersey Facts for Kids. Kiddle Encyclopedia.