Island Pond is a census-designated place (CDP) in the town of Brighton in Essex County, Vermont, United States. The population was 821 at the 2010 census. It is part of the Berlin, NH–VT Micropolitan Statistical Area.

Island Pond is in the center of the town of Brighton, at the north end (outlet) of Island Pond, the lake. Vermont Routes 114 and 105 pass through the community, joining as Derby Street leading south out of the center of the CDP. Route 114 leaves north from Island Pond as Railroad Street, leading 16 miles (26 km) to the Canada–United States border at Norton; to the south Route 114 leads 24 miles (39 km) to Lyndonville. Route 105 leaves east as East Brighton Road, leading 16 miles (26 km) to Bloomfield on the Connecticut River; to the southwest it follows Derby Street and Route 114 for 2 miles (3 km), then turns northwest and leads 17 miles (27 km) through Charleston to Derby Center.

Bluff Mountain overlooks the lake and the island from the north.

The Clyde River flows west out of Island Pond after which the community is named. The Abenaki called this water Menanbawk (literally, "island pond"). It was renamed "Knowlton Pond" in tribute to Luke Knowlton, the surveyor who helped lay out the town in the 1780s. The river is a tributary of Lake Memphremagog and part of the St. Lawrence River basin.

Island Pond became an important railroad center in 1853 when the Grand Trunk Railway established international connections between Montreal, Quebec, and Portland, Maine. The half-way point in the Portland-Montreal railroad line, this town became a booming railroad center with a roundhouse, shops, and all the facilities associated with train operations. In 1923 the Grand Trunk Railway of Canada was bankrupt and taken over by the Canadian government and operated as the Canadian National Railways. With the Canadian government directing the railroad, political considerations soon outweighed the economics of the railroad; commerce was displaced from the port of Portland to the Canadian ports of Halifax and St. John. The importance of the Portland line then began a decline which was never to be reversed. Island Pond's days as a major railroad town were over by the late 1950s due to the elimination of steam locomotives. By 1960 passenger train service to Portland had ended, and three years later the diesel locomotive shop was closed. In 1966 the roundhouse closed, and barely a skeleton staff of people worked in Island Pond. Canadian National continued to operate freight service to Portland until 1988; the following year the line was sold to a short line operator, the St. Lawrence & Atlantic Railroad, which provides service to this day.

Today, only the passenger station remains and is used by a bank. An historical society is housed on the upper floors. 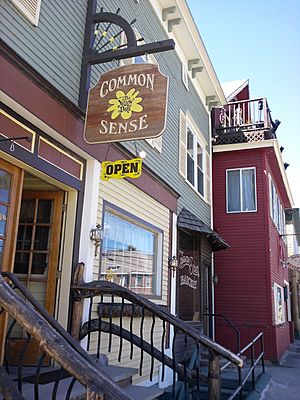 Common Sense Cafe at 28 Cross Street next door to Yellow Deli--both owned and operated by the Twelve Tribes.

In 2007, the Brighton Constable's strict enforcement of traffic regulations became the subject of nationwide coverage. In 2006 alone, 1,224 tickets and 1,662 warnings were issued. 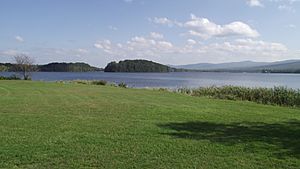 There were 374 households, out of which 28.3% had children under the age of 18 living with them, 44.4% were married couples living together, 13.4% had a female householder with no husband present, and 38.8% were non-families. 32.6% of all households were made up of individuals, and 19.0% had someone living alone who was 65 years of age or older. The average household size was 2.27 and the average family size was 2.88.

Island Pond is served by Vermont Routes 105 and 114. The St. Lawrence and Atlantic Railroad passes through the village. John H. Boylan State Airport is located east of the village on Route 105.

All content from Kiddle encyclopedia articles (including the article images and facts) can be freely used under Attribution-ShareAlike license, unless stated otherwise. Cite this article:
Island Pond, Vermont Facts for Kids. Kiddle Encyclopedia.