The Isonzo/Soča (Soča in Slovene; Isonzo in Italian; Lusinç in Friulian) is a river that flows through western Slovenia and northeastern Italy.

An Alpine river in character, its source lies in the Julian Alps in Slovenia and enters the Adriatic Sea close to the Italian town of Monfalcone.

The watershed of this river is one of the few places where the Marble trout (Salmo marmoratus) is found. 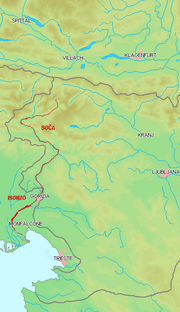 The source of the Soča lies in the Trenta Valley in the Julian Alps in northwestern Slovenia, at an altitude of 876 m (2,874 ft). The river flows through the Triglav National Park where is the mountain Triglav (2,864 m), the highest mountain in the Julian Alps and in the country. Then it flows to the south past the Slovenian towns of Bovec, Kobarid, Tolmin, Kanal ob Soci and Nova Gorica (where it is crossed by the Solkan Bridge); here, at an altitude of 56 m (184 ft), the river crosses the border and gets into Italy.

In Italy, the Soča, now called Isonzo, flows through several comuni of the Friuli-Venezia Giulia region. Theses comuni are:

Finally, it flows into the Gulf of Trieste (Adriatic Sea) in the Riserva Naturale della Foce dell'Isonzo ("Natural Reserve of the Mouth of the Isonzo"), to the southwest of the town of Monfalcone.

The valley of the Soča river was the place where several battles were fought in World War I between May 1915 and November 1917, in which over 300,000 Austro-Hungarian and Italian soldiers lost their lives.

All content from Kiddle encyclopedia articles (including the article images and facts) can be freely used under Attribution-ShareAlike license, unless stated otherwise. Cite this article:
Isonzo Facts for Kids. Kiddle Encyclopedia.