Bovec (Italian: Plezzo, German: Flitsch) is a small Slovenian town in the Julian Alps that is the administrative centre of the Municipality of Bovec (Slovene: Občina Bovec).

The town of Bovec is at an altitude of 434 m (1,424 ft), on the edge of the Bovec valley, a broad and flat valley where the small Koritnica river joins the Soča river.

Mild winters and warm summers are typical of the Bovec Valley. The mean annual temperature in the Bovec municipality is 11 °C (52 °F); the mean summer temperature (July, August) is 19.5 °C (67.1 °F) and the mean winter temperature (December, January) is −0.5 °C (31.1 °F). The average annual precipitation in the Bovec Valley is around 3,000 mm (118.1 in). The Kanin mountains have the highest precipitation in Slovenia, mostly in the form of snow between November and March. 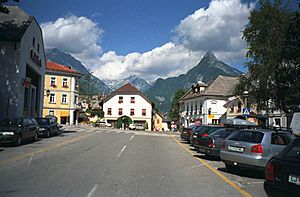 All content from Kiddle encyclopedia articles (including the article images and facts) can be freely used under Attribution-ShareAlike license, unless stated otherwise. Cite this article:
Bovec Facts for Kids. Kiddle Encyclopedia.