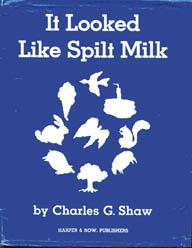 It Looked Like Spilt Milk is an American children's picture book, written and illustrated by Charles Green Shaw. Originally published in 1947, the illustrations are a series of changing white shapes against a blue background. The reader is asked to guess what the shape is or whether it is just "spilt milk". The white shapes include a rabbit, a bird, a pig, a sheep, a birthday cake, a tree, an ice cream cone, a flower, an angel, a squirrel, a mitten, and a great horned owl. At the end of the book, the shape reads the same thing as the first page ("Sometimes it looked like spilt milk. But it wasn't spilt milk".). It wasn't really spilt milk but only a cloud in the sky. Then the silhouette shape becomes a real cloud in the sky revealing that it was just a cloud.

All content from Kiddle encyclopedia articles (including the article images and facts) can be freely used under Attribution-ShareAlike license, unless stated otherwise. Cite this article:
It Looked Like Spilt Milk Facts for Kids. Kiddle Encyclopedia.