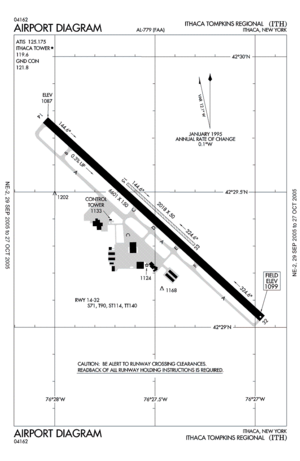 For over 50 years, the East Hill Flying Club has been at the airport. The club offers lessons and the use of seven small planes to its members. Taughannock Aviation which provides business jet charter and management is the fixed base operator for the airport.

The original Ithaca Municipal Airport was located west of downtown Ithaca, near the inlet of Cayuga Lake. Its single short runway, proximity to the Lehigh Valley freight yards on the south side, the Cayuga Lake marshes on the north side, and fog in the lake valley limited its growth. Cornell University opened the existing airport on East Hill in 1948 and transferred its ownership to the County in 1956. The former airport site is now Cass Park, including an airplane hangar which was renovated in 1975 to house the Hangar Theatre.

In 1994, the runway was extended from 5,801 feet (1,768 m) in length to its present 6,601 feet (2,012 m) and an entirely new, 33,000 square foot (3,000 m²) terminal building opened, replacing the cramped, aging original building. The airport name changed from Tompkins County Airport to its current name on March 20, 2001. The northwest-facing runway 32 has an instrument landing system approach and an associated medium intensity approach light system with runway alignment lights. Runway 14, facing southeast, has an instrument approach based on the VOR/DME located at the airport. A short turf runway was built parallel to the paved runway, but during the 1980s another turf runway oriented north-south was available to the west of the terminal building and was approximately 1,802 feet (549 m) long and 100 feet (30 m) wide.

Commercial traffic peaked in 1990 at 226,813 passengers. By 2000, the airport lost three of its major carriers. The airport was hurt by the small size of the market, relative proximity to Syracuse Hancock International Airport and other regional airports, and crowded conditions in Northeastern airspace. Trans World Airlines, United Airlines, and finally Continental Airlines left to serve more profitable routes, leaving US Airways the sole carrier.

In late 2004, after negotiations with the County, Northwest Airlines agreed to add Northwest Airlink service to Detroit Metropolitan Wayne County Airport, which began on May 2, 2005. US Airways nonstop service to Pittsburgh resumed on November 9, 2005 but stopped again on April 1, 2006 due to low use. (Pittsburgh is a US Airways focus city.) Passenger traffic improved with the additional service; the airport served about 140,000 passengers in 2004, increasing to around 170,000 in 2007.

Cornell kept much of the land surrounding the airport to build a research park.

TCAT Route 32 travels to the Commons and Cornell University Monday through Friday, As of 2010, Route 72 serves the airport on weekends.

Ithaca Dispatch (Cayuga, University, Yellow Cab) operates a taxi stand at the airport, although it may be necessary to call in advance, especially during peak hours. Fares to and from the airport are standardized.

All content from Kiddle encyclopedia articles (including the article images and facts) can be freely used under Attribution-ShareAlike license, unless stated otherwise. Cite this article:
Ithaca Tompkins Regional Airport Facts for Kids. Kiddle Encyclopedia.