James Bintliff (November 1, 1824 – March 16, 1901) was a colonel in the Union Army during the American Civil War. He briefly commanded brigades for three weeks near the end of 1864 and during most of the crucial month of April 1865. In 1866, he was nominated for appointment as and confirmed as a brevet brigadier general of volunteers in recognition of his conspicuous gallantry during the Third Battle of Petersburg on the final day of the Siege of Petersburg, April 2, 1865. On January 13, 1866, President Andrew Johnson nominated Bintliff for appointment to the grade of brevet brigadier general of volunteers to rank from the final date of the fighting at Petersburg, April 2, 1865. The United States Senate confirmed the appointment on March 12, 1866. In civilian life, Bintliff was one of the founders of The Northwestern Mutual Life Insurance Company. He was editor, publisher and proprietor of three newspapers, one before the Civil War and two after the war. He was a Wisconsin state government official for fourteen years from 1876 to 1891.

Bintliff was born on November 1, 1824 in Salterhebble, West Yorkshire to Gershom and Maria Hanson Bintliff. James was the third of nine children and the oldest son. In 1839 at the age of 15, he was employed as a lawyer's clerk in Halifax, West Yorkshire and later as a book-keeper for the Halifax and Wakefield Canal Company.

In 1842, accompanied by a younger brother and sister, he joined his father and mother and four other siblings in New York City. His parents had moved to New York a year earlier. According to an early biographical sketch, he "engaged in a woollen factory in New York State."

Bintliff was in business with his father until 1851. In 1851, Bintliff moved to Green County, Wisconsin where he engaged in farming. An abolitionist, Bintliff helped to found the Republican Party. After two years, he moved to Monroe, Wisconsin where he was a bookkeeper and cashier in a bank. In 1856, he was elected Register of Deeds of Green County and served for two years. By 1857 he was identified as a newspaper editor when he became one of the founders of The Northwestern Mutual Life Insurance Company, in which he had an interest for about two years. In 1859, Bintliff was admitted to the bar of Green County.

On September 1, 1862, James Bintliff was commissioned as a captain in the 22nd Wisconsin Volunteer Infantry Regiment of the Union Army. The unit served mainly in Kentucky and Tennessee. Detachments of the 22nd Wisconsin Infantry, which included Bintliff, were serving on garrison duty at Brentwood, Tennessee when they were attacked by a superior force led by Confederate Major General Nathan Bedford Forrest. In the Battle of Brentwood, on May 25, 1863, Forrest captured most of the garrison. Bintliff was captured and taken to Libby Prison in Richmond, Virginia as a prisoner of war. He was released and exchanged in May and rejoined his regiment, which was being reorganized at St. Louis, Missouri. He resigned his commission on December 27, 1863. At that time, President Lincoln appointed Bintliff as Commissioner on the Board of Enrollment for the Third Congressional District of Wisconsin.

Bintliff was mustered out of the volunteers on June 26, 1865. Soon thereafter, Bintliff was recognized for his success in commanding his regiment and two others during the Siege of Petersburg, especially for his conspicuous gallantry on April 2, 1865 during the Third Battle of Petersburg when the city fell to the Union Army. On January 13, 1866, President Andrew Johnson nominated Bintliff for appointment to the grade of brevet brigadier general of volunteers, to rank from April 2, 1865, and the U.S. Senate confirmed the appointment on March 12, 1866.

Bintliff's brother Gersham, served as a private in the 38th Wisconsin Infantry Regiment, of which James was colonel. His brother Thomas was a lieutenant in the 20th Wisconsin Volunteer Infantry Regiment and his youngest brother, Alfred, was a musician in the 5th Independent Battery Wisconsin Light Artillery.

After he returned from the war, Bintliff sold his one-half interest in the Monroe Sentinel and considered moving to Missouri. He found the area to be in turmoil and "did not deem it wise to remove any family there." He then bought a book, stationery and wallpaper business which he ran until 1870. In 1868, 1872 and 1876, Bintliff was a delegate to the Republican National Conventions at Chicago, Philadelphia and Cincinnati.

In 1870, Bintliff purchased a one-half interest in the Janesville Gazette at Janesville, Wisconsin and became its editor until December 1877. 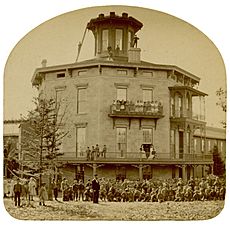 Between 1870 and 1877, he also was a member of the board of trustees, and for two years president of the board, of the Wisconsin Soldiers' Orphans' home. In early 1878, Bintliff and R. L. Colvin sold their interests in the Janesville Gazette. In April 1878, Bintliff bought a one-half interest in the Darlington Republican at Darlington, Wisconsin and became its editor and publisher. The other one-half interest was bought by his son, Edward H. Bintliff. Later in 1878, James Bintliff was a founder of the Darlington Literary Club which was established for the purpose of studying, presenting papers on and conversing about English literature. Bintliff prepared the list of the first twelve studies ranging from Chaucer to Addison and Steele. In April 1883, James Bintliff sold his one-half interest in the Darlington Republican to J. G. Monahan. Two years later, Monahan had bought the interest of Edward Bintliff and was running the paper as sole proprietor.

A brief sketch of his life by the Wisconsin Historical Society states that Bintliff retired to private life to spend time with his family and his studies after his term on the Board of Supervision expired. His home was in Darlington, Wisconsin until 1895 when he moved "to Chicago." In the first edition of a book published just before Bintliff's death, the author stated about Bintliff: "It is with much regret that I learn that he is nearly blind and past work at his home in Chicago. (1900.)" Bintliff died of a stroke on March 16, 1901 in South Chicago, Cook County, Illinois. James Bintliff was buried in Oak Hill Cemetery, Janesville, Wisconsin.

Bintliff's former home in Monroe, Wisconsin, now known as the Gen. James Bintliff House, is on the National Register of Historic Places.

All content from Kiddle encyclopedia articles (including the article images and facts) can be freely used under Attribution-ShareAlike license, unless stated otherwise. Cite this article:
James Bintliff Facts for Kids. Kiddle Encyclopedia.