James Child Drury Jr. (April 18, 1934 – April 6, 2020), was an Irish/American actor best known for his success in playing the title role in the 90-minute weekly Western television series The Virginian, broadcast on NBC from 1962–71.

Drury was born in New York City, the son of James Child Drury and Beatrice Crawford Drury. His father was a New York University professor of marketing. He grew up between New York City and Salem, Oregon, where his mother owned a farm. Drury contracted polio at the age of ten.

He studied drama at New York University and took additional classes at UCLA to complete his degree after he began acting in films at MGM.

Drury's professional acting career began when he was twelve years old, when he performed in a road company's production of Life with Father.

In 1959, Drury was cast as Harding, Jr., in the episode "Murder at the Mansion" on Richard Diamond, Private Detective. On May 9, 1959, early in his career, Drury appeared as Neal Adams in the episode "Client Neal Adams" of ABC's western series Black Saddle. In the story line, Adams is an old friend of series protagonist Clay Culhane, a gunfighter-turned-lawyer played by Peter Breck. Adams has robbed a bank of $8,000 and was subsequently shot in the back by a pursuing bounty hunter, played by Charles Aidman. Adams asks Culhane for help and makes the false claim that the bounty hunter is the brother of a man whom Adams had earlier killed in self-defense.

On Christmas eve 1959, Drury was cast in the episode, "Ten Feet of Nothing" on the syndicated anthology series, Death Valley Days, hosted by Stanley Andrews. Drury portrayed a young miner, Joe Plato, who in a drunken stupor gives away half of his then worthless mining claim to a saloon singer, Kathy Mulqueen (Preshy Marker). Kathy arrives to collect on her interest in the mine when gold is discovered on the adjacent property. Soon Joe and Cathy fall in love and marry. Hank Patterson was cast as Plato's friend, Abe.

In 1960, Drury appeared in different roles in two episodes, "Fair Game" and "Vindication" of another ABC western series, The Rebel, starring Nick Adams as a Confederate adventurer roaming through the post-Civil War American West. On November 16, 1960, Drury played young pioneer Justin Claiborne in the episode "The Bleymier Story" of NBC's Wagon Train.. He was also cast in the 1960 Disney movie, Pollyanna as George Dodds, the love interest of Nancy Olson.

In 1960, Drury portrayed Joe Darle in the episode "Wall of Silence" of the ABC/Warner Brothers detective series, Bourbon Street Beat. He made a memorable guest appearance on the CBS drama series Perry Mason in 1961, as he played the role of musician and defendant Eddy King in "The Case of the Missing Melody". 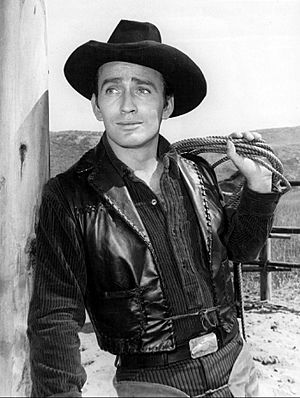 Drury as the Virginian

He appeared in secondary roles for Walt Disney. In 1962, he was cast in a substantial role as a lascivious gold prospector in the early Sam Peckinpah western Ride the High Country (1962) opposite Randolph Scott and Joel McCrea. Around the same time, Drury landed the top-billed leading role of the ranch foreman on The Virginian, a lavish series which ran for nine seasons until 1971.

Drury and his Wilshire Boulevard Buffalo Hunters band performed 54 USO-sponsored shows for troops in Vietnam in three weeks in April 1966.

In a sequel to The Virginian, Drury continued his title role in The Men from Shiloh on NBC (1970-1971). He had the lead role of Captain Spike Ryerson in the drama series Firehouse on ABC television in 1974.

In 1993, Drury had a guest-starring role as Captain Tom Price on the first three episodes of Walker, Texas Ranger, opposite Chuck Norris and Clarence Gilyard. Drury also had a cameo role in the 2000 TV movie of The Virginian starring Bill Pullman. The film followed Wister's novel more closely than had the television series. Drury appeared in a number of films and other television programs, including The Young Warriors and the TV cowboy reunion movie The Gambler Returns: The Luck of the Draw with Doug McClure, who played the character Trampas during The Virginian.

In 1991, Drury was inducted into the Hall of Great Western Performers at the National Cowboy and Western Heritage Museum in Oklahoma City. In 1997 and 2003, he was a guest at the Western Film Fair in Charlotte, North Carolina.

Drury was in the oil and natural gas business in Houston at the turn of the 21st century. His son, Timothy Drury, is a keyboardist, guitarist and vocalist who has played with the rock groups The Eagles and Whitesnake.

All content from Kiddle encyclopedia articles (including the article images and facts) can be freely used under Attribution-ShareAlike license, unless stated otherwise. Cite this article:
James Drury Facts for Kids. Kiddle Encyclopedia.