Jandowae /ˈdʒændəweɪ/ is a town in southern Queensland, Australia. The town is 259 kilometres (161 mi) west of the state capital, Brisbane. At the 2011 census, Jandowae had a population of 1,246.

The first European settlers arrived in the area in the 1860s and the first documented European birth was Henry Bateman in 1866. Henrys descendants still live in the town today. The town was at first called Jindowie, from the local Aboriginal word for a waterhole. Later, a man called John or Jack Dowiae established a camp and rest area for travellers called the John Dowiae camp. This led to some early settlers using the name Jondowiae. With the coming of the railway in 1914, the name was changed again to Jandowae, to avoid confusion with nearby Jondaryan. The Jandowae school was established in 1877 with thirteen students enrolled for the first year.

The fertile soil allowed the development of agriculture and combined with a flourishing timber industry saw the expansion of industry and commerce and the establishment of churches, halls and banks.

Jondowae's first Post Office opened on 1 January 1890, and exists today as a private residence. The township was renamed Jandowae in 1913. 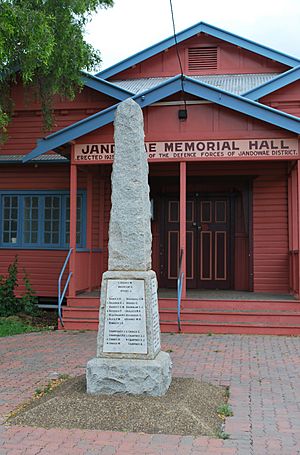 The Jandowae war memorial was unveiled by Victory Drury and the Member of the Queensland Legislative Assembly for Dalby, Walter Sparkes, on 25 April 1935.

Jandowae, which was the largest town in the Wambo Shire prior to its amalgamation, is surrounded by rich alluvial soil and is one of Queensland's largest wheat growing areas. The area also produces other crops such as barley, sorghum, oats, millet, panicum, sunflower, safflower and linseed. Beef and dairy cattle are raised in the area and Jandowae was home to two large sawmills.

Facilities in the town include a P–10 school, a post office, Queensland Government Agent and a bank. There are three hotels in Jandowae known locally as the Top pub (Club Hotel), the Middle pub (The Exchange Hotel) and the Bottom pub (Jandowae Hotel), all providing meals and accommodation. Sporting facilities include bowls, golf, tennis, swimming, squash and a new skate park facility.

In 2001, in order to stem a decline in population and economic activity and encourage new residents and industry to Jandowae, Wambo Shire Council ran a "dollar block" promotion. The promotion involved the sale of 38 parcels of land, both residential and industrial, for one dollar each. The promotion made news throughout Australia and overseas including New Zealand, Hong Kong, England and the United States. The promotion proved popular with over 1,000 applications received. To maintain fairness, a ballot system was implemented along with a condition requiring the establishment of a house on the block within 12 months or the land would return to the ballot. As a result of the promotion, the decline in population was halted and new industry was attracted to town including a manufacturer of RFID cattle ear tag readers.

The major festival in Jandowae is the Jandowae Timbertown festival. The festival, held biennially, recognises and celebrates the contribution that the timber industry has made to Jandowae and attracts 3,000 to 4,000 people to the town. Other events in the town include a senior pro-am golf tournament and the Jandowae Cup race meeting.

All content from Kiddle encyclopedia articles (including the article images and facts) can be freely used under Attribution-ShareAlike license, unless stated otherwise. Cite this article:
Jandowae Facts for Kids. Kiddle Encyclopedia.