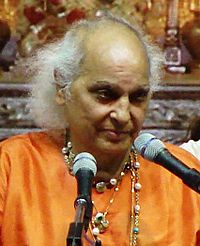 Pandit Jasraj (28 January 1930  – 17 August 2020) was an Indian classical vocalist. His songs were related to Mewati gharana. His musical career lasted for 75 years. He was born in present-day Fatehabad, Haryana.

He was also the founder of schools for Indian classical music in Atlanta, Tampa, Vancouver, Toronto, New York, New Jersey, Pittsburgh, Mumbai, and Kerala. At age 90, he was teaching some of his international students through Skype.

Jasraj died of cardiac arrest on 17 August 2020 while visiting family in the United States in New Jersey, aged 90.

All content from Kiddle encyclopedia articles (including the article images and facts) can be freely used under Attribution-ShareAlike license, unless stated otherwise. Cite this article:
Jasraj Facts for Kids. Kiddle Encyclopedia.