Dumont was hired as the head coach of the Tier III Nashville Junior Predators, based in Franklin, Tennessee, in 2016. 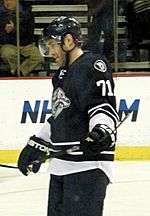 Dumont playing for the Predators in 2010

Before playing in the NHL, Dumont played 4 seasons with the Val-d'Or Foreurs of the Quebec Major Junior Hockey League (QMJHL). He was drafted with the 3rd overall pick by the New York Islanders in the 1996 NHL Entry Draft. Dumont had a contract dispute with the Islanders and they traded him and a 5th round draft pick to the Chicago Blackhawks for Dmitri Nabokov in 1998.

After the Sabres rejected Dumont's $2.9-million arbitration award, he signed a two-year, $4.5-million contract with the Nashville Predators on August 29, 2006. On June 30, 2011, the Predators bought out Dumont's contract and he became an unrestricted free agent for July 1. He retired from playing professional ice hockey in 2013. Since retiring, Dumont is currently a member of tag HC Nashville which is based in Nashville, Tennessee.

All content from Kiddle encyclopedia articles (including the article images and facts) can be freely used under Attribution-ShareAlike license, unless stated otherwise. Cite this article:
Jean-Pierre Dumont Facts for Kids. Kiddle Encyclopedia.