Gerald Francis "Jerry" Coleman (September 14, 1924 – January 5, 2014) was a Major League Baseball (MLB) second baseman for the New York Yankees and manager of the San Diego Padres for one year. Coleman was named the rookie of the year in 1949 by Associated Press, and was an All-Star in 1950 and later that year was named the World Series Most Valuable Player. Yankees teams on which he was a player appeared in six World Series during his career, winning four times. He later became a broadcaster, and he was honored in 2005 by the National Baseball Hall of Fame with the Ford C. Frick Award for his broadcasting contributions. 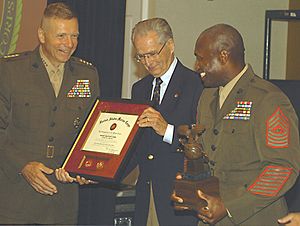 Nicknamed "The Colonel" because he was a U.S. Marine Corps lieutenant colonel, Coleman was a Marine aviator who postponed his entry into professional baseball in World War II and later left baseball to serve in the Korean War. While a Marine Corps aviator he flew 120 combat missions (57 during World War II and 63 in Korea). and received numerous honors and medals, including induction into the USMC Sports Hall of Fame, for his call to duty.

Coleman was the recipient of the following medals:

In 2011, Coleman was inducted into the International Aerospace Hall of Fame in a ceremony at the San Diego Air & Space Museum for his service as a combat pilot in World War II and the Korean War.

Coleman's death was reported by the San Diego Padres on January 5, 2014. He died after being hospitalized after a fall in his home. He was 89. Coleman was interred at Miramar National Cemetery after a private funeral. He was outlived by his second wife and three children.

In 2015, a sports facility at Marine Corps Recruit Depot San Diego was named in honor of Coleman.

All content from Kiddle encyclopedia articles (including the article images and facts) can be freely used under Attribution-ShareAlike license, unless stated otherwise. Cite this article:
Jerry Coleman Facts for Kids. Kiddle Encyclopedia.