Joseph Henry "Bad Joe" Hall (May 3, 1881 – April 5, 1919) was a Canadian professional ice hockey player. Hall played senior and professional hockey from 1902 to 1919, when he died as a result of the influenza epidemic of 1918. He won the Stanley Cup twice with the Quebec Bulldogs and once with the Kenora Thistles. 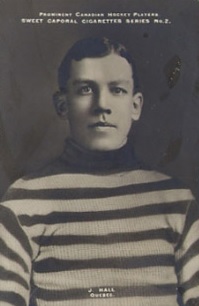 Hall was born in Staffordshire, England, United Kingdom and grew up in Brandon, Manitoba. Nicknamed "Bad Joe" for his aggressiveness on the ice, he played in the Manitoba Hockey Association with the Brandon Wheat Kings, Winnipeg Rowing Club and the Kenora Thistles, and in the National Hockey Association as a member of the Quebec Bulldogs. He played for the Montreal Canadiens in their first two seasons in the National Hockey League from 1917-1919.

Hall won the Stanley Cup with the Kenora Thistles in 1907, for which he received a "loving cup" which is on display in the Hockey Hall of Fame. He won the Cup with the Quebec Bulldogs in 1912 and 1913. He also challenged for the Stanley Cup in 1904 with the Winnipeg Rowing Club.

In 1919, Hall was part of the Montreal Canadiens team that made it to the Stanley Cup Finals. The Finals were interrupted and eventually cancelled due to an outbreak of Spanish influenza. The flu was contracted by several players on both the Canadiens and their opponents, the Seattle Metropolitans. Hall would eventually succumb to pneumonia, related to his influenza, in a hospital in Seattle, Washington just four days after the Stanley Cup Final series was abandoned.

He was inducted into the Hockey Hall of Fame in 1961.

All content from Kiddle encyclopedia articles (including the article images and facts) can be freely used under Attribution-ShareAlike license, unless stated otherwise. Cite this article:
Joe Hall Facts for Kids. Kiddle Encyclopedia.