Kids Encyclopedia Facts
This page is about a United States sculptor. For the mathematician of the same name, see Joel Shapiro (mathematician). 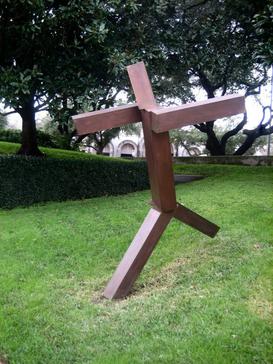 Joel Shapiro (born September 27, 1941 New York City, New York) is an American sculptor renowned for his dynamic work composed of simple rectangular shapes. The artist is classified as a Minimalist as demonstrated in his works, which were mostly defined through the materials used, without allusions to subjects outside of the works. He lives and works in New York City. He is married to the artist Ellen Phelan.

Joel Shapiro grew up in Sunnyside, Queens, New York. He graduated from Bayside High School (Bayside, NY) in 1959, at which time the school’s yearbook awarded him the title of Man About Town. When he was twenty two he lived in India for two years while in the Peace Corps. He received a B.A. in 1964 and an M.A. in 1969 from New York University

While serving his Peace Corp time in India, Shapiro saw many Indian art works, and has said that "India gave me the sense of … the possibility of being an artist." In India "Art was pervasive and integral to the society", and he has said that "the struggle in my work to find a structure that reflects real psychological states may well use Indian sculpture as a model." His early work, which also drew inspiration from Greek art, is characterized by some by its small size, but Shapiro has discounted this perception, describing his early works as, "all about scale and the small size was an aspect of their scale". He described scale as "A very active thing that's changing and altering as time unfolds, consciously or unconsciously," and, "a relationship of size and an experience. You can have something small that has big scale." In these works he said that he was trying "to describe an emotional state, my own longing or desire". He also said that during this early period in his career he was interested in the strategies of artists Robert Morris, Richard Serra, Carl Andre, and Donald Judd.

By the 1980s, Shapiro began to explore larger and life-size forms in pieces that were still reminiscent of Indian and Greek sculpture but also inspired by the early modernist works by Edgar Degas and Constantin Brâncusi. The bulk of these pieces have been commissioned or acquired by museums and galleries. Later, Shapiro further expanded his repertoire by creating pieces that depicted the dynamism of human form. For instance, his subjects were portrayed in the act of dancing, crouching, and falling, among others that explored the themes of balance, cantilever, projection, and compression. His later works can have the appearance of flying, being impossibly suspended in space, and/or defying gravity. He has said about this shift in his work that he "wanted to make work that stood on its own, and wasn't limited by architecture and by the ground and the wall and right angles." These can be demonstrated in the case of the large-size outdoor art he made for the Hood Museum of Art. The bronze piece was an attenuated form that leans over a walkway and its near-falling form is viewed as an energizing element in the museum's courtyard. This sculpture, like all of Shapiro's mature works, are untitled. 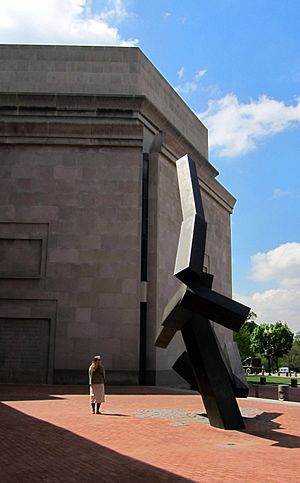 Note: Joel Shapiro's sculpture name is unknown in the Denmark section, so the name of the sculpture isn't there.

All content from Kiddle encyclopedia articles (including the article images and facts) can be freely used under Attribution-ShareAlike license, unless stated otherwise. Cite this article:
Joel Shapiro Facts for Kids. Kiddle Encyclopedia.