He was awarded the Valz Prize from the French Academy of Sciences in 1906. The Phocaea main-belt asteroid 914 Palisana, discovered by Max Wolf in 1919, and the lunar crater Palisa were named in his honour. 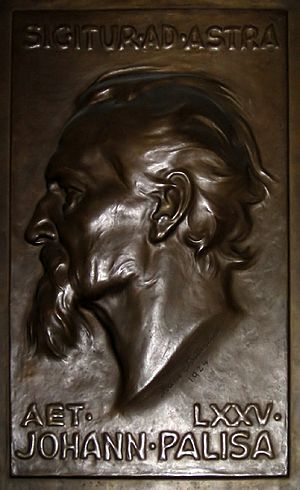 From 1866 to 1870, Palisa studied mathematics and astronomy at the University of Vienna; however, he did not graduate until 1884. Despite this, by 1870 he was an assistant at the University's observatory, and a year later gained a position at the observatory in Geneva.

A few years later, in 1872, at the age of 24, Palisa became the leader of the Austrian Naval Observatory in Pola. While at Pola, he found his first asteroid, 136 Austria, on March 18, 1874. Along with this, he found twenty-seven minor planets and one comet. During his stay in Pola he used a small six-inch refractor telescope to aid in his research.

All content from Kiddle encyclopedia articles (including the article images and facts) can be freely used under Attribution-ShareAlike license, unless stated otherwise. Cite this article:
Johann Palisa Facts for Kids. Kiddle Encyclopedia.