Jonas Hiller (born 12 February 1982) is a Swiss professional ice hockey goaltender currently playing for EHC Biel of the National League (NL). He has also played for the Calgary Flames and the Anaheim Ducks, the team he began his NHL career with in 2007 after going undrafted in any NHL Entry Draft. 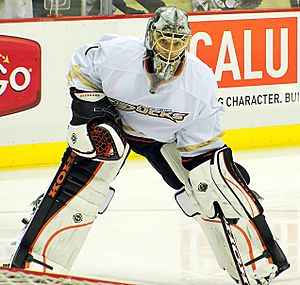 On September 30, 2007, Hiller made his NHL debut for the Anaheim Ducks. Hiller was named as the Ducks starting goaltender for the 2009 NHL Playoffs. On July 1, 2014, Hiller decided to sign a two-year, $4.5 million per year contract as a free agent with the Calgary Flames. Calgary opted not to re-sign Hiller after the season.

On 19 April 2016, he agreed to a three-year contract with EHC Biel of the National League A (NLA) worth CHF 2.1 million.

All content from Kiddle encyclopedia articles (including the article images and facts) can be freely used under Attribution-ShareAlike license, unless stated otherwise. Cite this article:
Jonas Hiller Facts for Kids. Kiddle Encyclopedia.