José Sarney de Araújo Costa (born April 24, 1930 as José Ribamar Ferreira de Araújo Costa) is a Brazilian politician, lawyer, and writer who served as 31st President of Brazil from March 15, 1985 to March 15, 1990. At age 91, he is the oldest living former Brazilian president, and, as of the death of João Figueiredo in 1999, the only living former president not elected by direct vote. 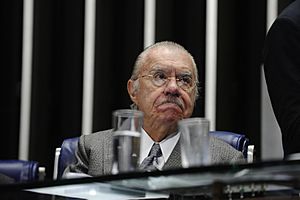 Sarney ascended in the politics of his home state of Maranhão as part of the "Bossa Nova Generation" of UDN politicians in the 1950s, young idealists seeking to reorganize public administration and rid the government of corruption and old practices. Sarney was instrumental in the creation of the Liberal Front Party.

He agreed to run for Vice-President on the ticket of Tancredo Neves of PMDB. Neves won the presidential election, but fell ill and died before taking office, and Sarney became President. He started out his term with great popularity, but public opinion shifted with the Brazilian debt crisis and the failure of Plano Cruzado to abate chronic inflation. 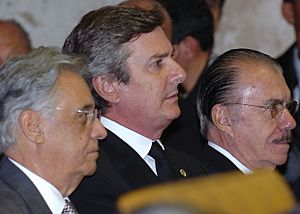 Sarney owns the most important newspapers and TV stations in Maranhão, and remains influential there. He is also an accomplished writer, and a member of the Brazilian Academy of Letters.

All content from Kiddle encyclopedia articles (including the article images and facts) can be freely used under Attribution-ShareAlike license, unless stated otherwise. Cite this article:
José Sarney Facts for Kids. Kiddle Encyclopedia.