Josiah, literally meaning "healed by Yah" or "supported of Yah" was a seventh-century BCE king of Judah (c. 649–609) who, according to the Hebrew Bible, instituted major religious reforms. Josiah is credited by most biblical scholars with having established or compiled important Hebrew Scriptures. Josiah became king of Judah at the age of eight, after the assassination of his father, King Amon, and reigned for thirty-one years, from 641/640 to 610/609 BCE.

Josiah is known only from biblical texts; no reference to him exists in surviving texts of the period from Egypt or Babylon, and no clear archaeological evidence, such as inscriptions bearing his name, has ever been found. Nevertheless, most scholars believe he existed and that the absence of documents is due to few documents of any sort surviving from this very early period, and to Jerusalem having been occupied, conquered, and rebuilt for thousands of years.

The Bible describes him as a very righteous king, a king who "walked in all the way of David his father. He is also one of the kings mentioned in the genealogy of Jesus in Matthew's gospel. 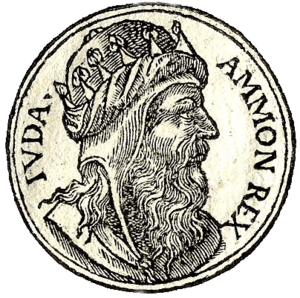 According to the Hebrew Bible, Josiah was the son of King Amon and Jedidah, the daughter of Adaiah of Bozkath. His grandfather Manasseh was one of the kings blamed for turning away from the worship of Yahweh. Josiah's great-grandfather was King Hezekiah, a noted reformer.

There are two accounts of Josiah's death in the Bible. The Second Book of Kings merely states that Necho II met Josiah in battle at Megiddo and killed him, whereas the second book of Chronicles gives a lengthier account and states that Josiah was fatally wounded by Egyptian archers and was brought back to Jerusalem to die.

All content from Kiddle encyclopedia articles (including the article images and facts) can be freely used under Attribution-ShareAlike license, unless stated otherwise. Cite this article:
Josiah Facts for Kids. Kiddle Encyclopedia.