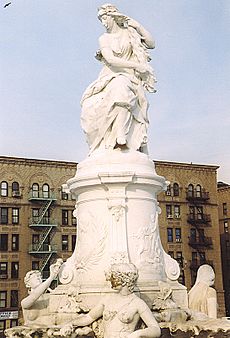 The Lorelei Fountain, also known as the Heinrich Heine Memorial, is located on East 161st Street in the Concourse section of the Bronx, New York City, near the Bronx County Courthouse. It is a white marble fountain dedicated to the memory of the German poet and writer Heinrich Heine. Heine had once written a poem devoted to the Lorelei, a feminine water spirit much like a mermaid that is associated with the Lorelei rock in St. Goarshausen, Germany. The monument was originally to be placed in Heine's hometown of Düsseldorf, but antisemitism and nationalist propaganda in the German Empire precluded the completion of the monument on Heine's 100th birthday in 1897. Instead, it was unveiled on July 8, 1899 in the presence of the sculptor, Ernst Herter, in the Bronx. 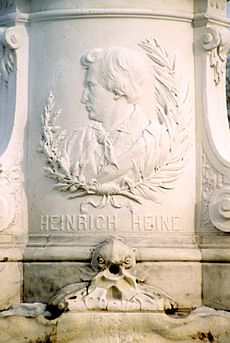 Above the fountain bowl situated in Joyce Kilmer Park, bounded by the Grand Concourse, Walton Avenue, 164th Street, and 161st Street, a life-size figure of Lorelei rises, supported on a base; the monument stands at the southern end of the Joyce Kilmer Park and is near 161st Street and the Grand Concourse, across from the Bronx County Courthouse. Three mermaids sit in the fountain bowl resting at the base, which is supported by three volutes. Located on the front side of the base, between two volutes, is a relief of a profile portrait of Heine. Below that is the signature of the poet. The figure to the left of the relief, symbolizing poetry, sits to the right of the figure symbolizing satire; on the back is a figure signifying melancholy. Between the three figures are three dolphin heads.

The Lorelei is dressed, according to Herter's biographer Brigitte Hüfler, in a non-contemporary garb. She wears a necklace, and her embroidered jacket is pulled over the hips. 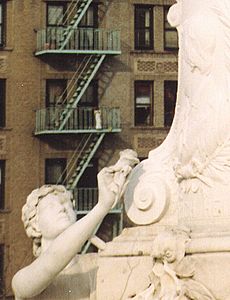 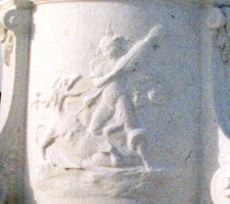 The figure symbolizing poetry is the only one of the three figures that faces the relief of Heine. It also faces towards a rose, which is supposed to express a particularly intimate relationship between poetry and Heine. From the right of the Heine-relief is the figure of satire, which turns her upper body towards Heine. In the back of the monument is positioned the "melancholy". The hair of the figure is long and unadorned, and she looks down sadly.

The reliefs on the barrel bridge the space between the auxiliary figures and the Lorelei. The Sphinx is holding a young man and gives him probably the kiss of death, because the Riddle of the Sphinx has not been resolved. The humorous relief signifying killing a dragon could be interpreted as a matter of prejudice and public opinion. Heine's relief is embraced with a palm and a spruce twig.

In the autumn of 1887, a committee for the establishment of a Heine Memorial was formed in Düsseldorf. The aim of the initiative was to unveil the monument to the 100th birthday of the poet, in 1897. The Munich-based poet Paul Heyse participated in a call to the committee, and, among other things, wrote to the Düsseldorf Gazette on November 2, 1887 in Düsseldorf Gazette. Following Düsseldorf's lead, other German cities formed committees to support the project. Even in New York there was interest in the project. The Austro-Hungarian Empress and Heine admirer, Elisabeth, also joined the Düsseldorf committee, and sent 50,000 marks toward the construction of the monument under the condition that the Berlin sculptor Ernst Herter would build it. In December 1887, Herter provided some designs for the monument.

The efforts of the Düsseldorf city council made progress. On March 6, 1888, the Düsseldorf City Council decided to build a Heine monument at a tie of eleven to eleven votes, including the vote of the Mayor Heinrich Ernst Lindemann, who was also a member of the Memorial Committee. The City Council was thus as divided as the German public, since the announcement of the monument plans sparked fierce debate. At the time of the vote, Herter already had a first plan for the monument, in that it was to contain a canopy. Since the Empress did not like this design, in May 1888 two further proposals came about: one depicting Heine sitting on a pedestal, the other with the current Lorelei fountain. The designs were submitted on June 30, 1888. While Elisabeth preferred the Heine-figure, Düsseldorf preferred the Lorelei Fountain.

Opposition to the monument formed almost immediately after the plans were released in the autumn of 1887. That year, two pamphlets were published, directed against Heine. In addition, several writers and newspapers wrote pieces defaming Heine. However, among some German journalists and writers, Heine was still popular and his plan was still supported.

By January 1889, the Empress withdrew her support. The project was thus temporarily shelved because public donations netted only 15,000 marks. However, since Herter had estimated a cost of 32 to 40,000 marks to build the monument, the artist now began to collect donations for the monument in its own right, but his efforts were unsuccessful. Important supporters also resigned from the Düsseldorf Memorial Committee, including Paul Heyse and Mayor Lindemann. Due to limited funding, the Committee decided to grant Herter the contract for another draft. In December 1892, the Committee and sculptor signed a contract for the pedestal. 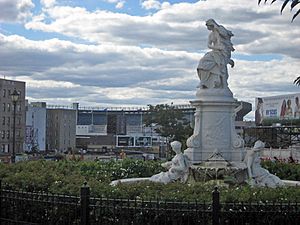 The monument with the former Yankee Stadium in the background, 2007 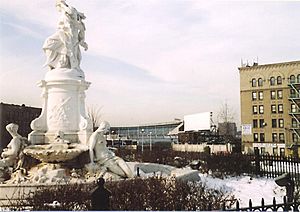 The monument with the former Yankee Stadium in the background, 2003 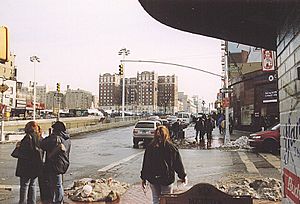 East 161st Street looking east; the monument is to the left outside this picture

Based on the City Council's decision in March 1888, the Committee announced on January 5, 1893 that the Heine monument was to be completed in 1895 and then erected in the courtyard. However, on January 24, 1893, the construction permit was withdrawn since it was not covered by city laws, and also because of prevailing antisemitism in the German Empire at the time. The Committee filed a lawsuit against the city for not allowing the construction of the statue in the courtyard. After Düsseldorf rejected the monument, the cities of Mainz and Frankfurt then both wanted to install the monument in their city. In particular, the Mayor of Mainz, Georg Oechsner, wanted to establish the Lorelei Fountain in Mainz. The Mainz City Council, on July 10, 1893, authorized the erection of the monument, but the plan to put the monument in Mainz was strongly opposed. During that time, Oeschner was ousted as mayor and new City Council members were elected, so that on October 31, 1894, the monument was rejected by a large majority.

Since plans to establish the monument in Frankfurt had failed, places to erect it outside Germany were considered. Beginning on April 14, 1893, a New York-based German singing society, the Arion Society of New York City, expressed interest in the monument. Herter received an official request from New York City's government and supposedly went to work immediately on the new site in New York.

However, in New York, the monument's construction did not go smoothly. It was not only the monument itself, but also due to the fact that the German immigrants wanted to put it up at the Grand Army Plaza entrance to Central Park, at corner of 5th Avenue and 59th Street, where a monument to Chester A. Arthur had just been rejected in 1893. Although prominent German-Americans, such as the former US government official Carl Schurz, supported the project, toward the end of 1895, there were some complications with the construction. The Arion Society began to describe the design as "dry, weak and unconventional". The New York City Parks Department had also asked the government of Düsseldorf whether the monument had been refused in the latter only for political, and not also for artistic, reasons.

The New York Times described the monument as an "example of academic mediocrity, worthy of erection, but not worthy of erection as our chief municipal ornament". Due to the large opposition to the monument in Grand Army Plaza, alternate places to put the monument were considered, such as Brooklyn and Queens in New York City, or even in Baltimore, Maryland. On March 10, 1896, members of the Democratic Party brought the project directly to the New York City Council without specifying a precise location. Simultaneously, at the suggestion of Republican Party, New York State had created an art commission on March 4, 1896, which decided to place the monument in the Bronx. The monument was unveiled on July 8, 1899, at East 164th Street and Grand Concourse in the Bronx, to a crowd of 4,000 to 6,000 people, with Herter attending in the crowd.

The monument was, from the start, the subject of frequent abuse and vandalism; although the monument was guarded by police, in 1900, the mermaids' arms were cut off. In 1940, the fountain was moved to the northern end of the park and partially repaired In the following decades, the vandalism subsided, but later, the heads of the female characters were cut off again, the monument sprayed all over with graffiti. In the 1970s, the fountain was considered the statue in New York most affected by vandalism and destruction.

Plans to completely restore and move the monument back to its original position were formed in 1987. The Municipal Art Society of New York launched an "Adopt a Monument" program, which rehabilitated about 20 monuments. However, because of the initially estimated cost of $275,000, the renewal was delayed. A visit to former North Rhine-Westphalia Prime Minister Johannes Rau in September 1989 netted a 50,000 mark donation; later, $700,000 was raised through private donations. The fountain was reopened on July 8, 1999 at East 161st Street and the Grand Concourse, three blocks from its original location.

All content from Kiddle encyclopedia articles (including the article images and facts) can be freely used under Attribution-ShareAlike license, unless stated otherwise. Cite this article:
Lorelei Fountain Facts for Kids. Kiddle Encyclopedia.