Juan-les-Pins is a town and a health resort and spa in the commune of Antibes, in the Alpes-Maritimes, in southeastern France, on the Côte d'Azur. It is situated between Nice and Cannes, 13 kilometres (8 mi) from Nice Côte d'Azur Airport.

It is a major holiday destination popular with the international jet-set, with casino, nightclubs and beaches, which are made of fine grained sand, and are not straight, but instead are cut with small inlets. 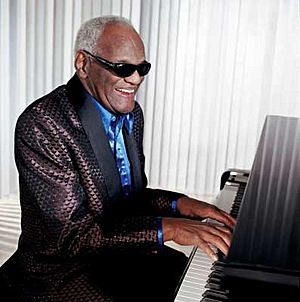 Juan-les-Pins is famous for its annual jazz festival in July. New Orleans is a sister city, a connection which for a number of years was shown in carnival festivities in the streets of Juan-les-Pins, in which both local and New Orleans jazz bands paraded.

All content from Kiddle encyclopedia articles (including the article images and facts) can be freely used under Attribution-ShareAlike license, unless stated otherwise. Cite this article:
Juan-les-Pins Facts for Kids. Kiddle Encyclopedia.