The Judges' Lodgings, formerly a town house and now a museum, is located between Church Street and Castle Hill, Lancaster, Lancashire, England. It is recorded in the National Heritage List for England as a designated Grade I listed building. The building is the oldest existing town house in Lancaster, and was also the first house in Lancaster to have shutters. It was used by judges when they attended the sessions of the Assize Court.

Use of the house by visiting judges ended in 1975, and the building was converted into a museum; featuring a museum of childhood, and the Gillow furniture collection. The future of the museum is currently in doubt, following an accouncement from Lancashire County Council that it would be closed permanently. Closure was initially proposed to take place on 31 March 2016, but it was deferred.

There is evidence that older buildings have stood on the site. The remains of a Roman kiln were discovered in the garden. It is likely that the first house on the site was built in wood, and later replaced in stone. It is possible the house built in 1314 for Robert de Holland was on this site. The oldest fabric in the present house dates from the 1550s: In the entrance hall is a massive stone fireplace of that date.

Lancaster was severely damaged by Royalist forces in 1643 during the Civil War. Around 1662 the property was bought by Thomas Cole, Deputy Lieutenant of Lancashire. The building was extended and altered in 1675, and the new building was called "New Hall".

The house was sold in 1826 to the county magistrates. Following this an extension was added to the side of the building, and other alterations were made. Use of the house by visiting judges ended in 1975, and the building was converted into a museum. This includes a Museum of Childhood, and a collection of furniture made by the Lancaster firm of Gillows (later Waring & Gillow).

Due to cuts to local council budgets by the Cameron government, in November 2015 Lancashire County Council proposed withdrawing all funding for five museums across Lancashire: the Judges' Lodgings, Fleetwood Museum, Helmshore Mills Textile Museum, Museum of Lancashire and Queen Street Mill. The leader of the council spoke of "the financial challenges facing the county council as we deal with relentless cuts to central government funding combined with rising demand for our services". Despite letters of protest and an on-line petition the council confirmed their decision at a meeting in February 2016 and the Judges' Lodgings was told it would close its doors for the last time on 31 March. A group of concerned citizens formed a "Friends of the Judges' Lodgings" in the hopes of finding a way to allow the museum to continue. In March 2016 the closure of all five museums was deferred until September 2016.

The museum closed on 30 September 2016, along with the other four Lancashire museums mentioned above, except for pre-booked school groups. As of 8 October  2016 (2016 -10-08)[update] Lancashire County Council's website states that "Negotiations are underway with a potential new operator."

The building is constructed in sandstone rubble with ashlar dressings and slate roofs. It has a U-shaped plan. The entrance front faces west, is symmetrical, has three storeys and a basement, and is in seven bays. The architectural style is Georgian. The doorcase has Tuscan columns supporting blocks carved with lions' heads, a triglyph frieze containing flowers, and an open segmental pediment containing a painting of the arms of Lancashire. 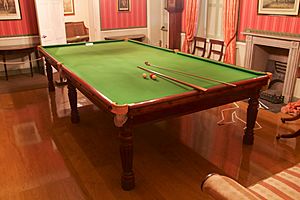 A Regency English billiards table by Gillows at Judges' Lodgings.

The building houses an extensive collection of Gillows furniture, which is partly displayed in the context of a museum of the firm and partly in rooms furnished in period style.

Robert Gillow (1704-1772) started making furniture around 1727, predating Thomas Chippendale by twenty years. He made furniture for the upper middle classes and landed gentry. Robert was succeeded by his sons: Richard managed the Lancaster production, and Robert set up a London operation. As a provincial he was unique in having a London showroom. It was a family business until 1813, when the Gillow family sold the firm to three partners, Redmayne, Whiteside, and Ferguson, who retained the name Gillow & Co. Gillows furniture is referred to by Jane Austen, Thackeray and the first Lord Lytton, and in one of Gilbert and Sullivan's comic operas.

Much of the furniture in the Judges' Lodging was commissioned by specific clients. The firm's Estimate Sketch Books are preserved in Westminster City Archives. They constructed furniture to their own design and nurtured their own designers but equally they would construct furniture for designers without production capacity. He did works for Chippendale, Sheraton and Hepplewhite.

By 1900, the firm was producing a complete interior decoration service but this strained the company's finances - and it was taken over by Waring of Liverpool in 1903. Waring & Gillow continued but never achieved the same reputation for quality. They folded in 1962, and the Lancaster workshops closed.

In war time, they built wings and propellors for the de Havilland DH9 and parts of the Mosquito.

During the 1860s and 70s, Gillows employed the Gothic Revivalist designer Bruce James Talbert (1838–81). The firm produced many items of furniture to Talbert's designs, including two sideboards from around 1872, on display at the Judges' Lodgings.

In 1867, Talbert wrote Gothic Forms Applied to Furniture, Metal Work and Decoration for Domestic Purposes, this work proved to be influential on the commercial production of furniture. Talbert recommended framed construction, decorative inlay and low-relief carving. Another recommendation was the use of large, flat metal hinges. Talbert's work was displayed at numerous international exhibitions, including the International Exhibition of 1873, and his designs in the Medieval and Jacobean styles were produced by many cabinet making firms. His designs tended to be highly detailed, including bold geometric inlaid patterns, intricately carved squares of boxwood and rows of small turned spindles. Some pieces included a carved verse with a moral message.

In the sideboards at the Judges' Lodgings, one of which is known as the Dundee Cabinet, produced by Gillows to Talbert's designs, his characteristic carved squares, geometric designs and rows of spindles are clearly evident.

The Dundee Cabinet is made of stained baywood with inlaid panels of thuya and boxwood. The item is stamped Gillows of Lancaster. An identical piece to this cabinet is illustrated in an entry dated 8 March 1872 in Gillows' Estimate Sketch Book. The drawing is annotated Inlaid bird panel as before, therefore it appears that a similar cabinet had been made previously. An elaborated version of the cabinet appeared in Talbert's Examples of Ancient and Modern Furniture, published in 1876.

The sideboard displayed in the butler's pantry is made of oak with panels of boxwood.

On display in the museum are some notable works by George Romney. Romney, who was born in the Furness district of what was then Lancashire, relocated to London in the 1760s but remained in contact with Lancashire, painting the local gentry and buying picture frames from Gillows. A portrait of Abraham Rawlinson, MP for Lancaster in the 1780s, hangs in the entrance hall: it was acquired in 2006. There are also portraits by Joseph Wright of Derby and Sir Thomas Lawrence. 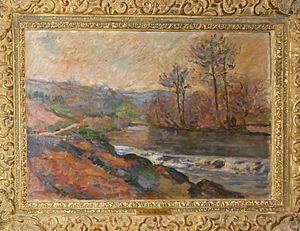 The Creuse at Genetin, Armand Guillaumin

There is a collection of six French paintings, the Lionel Hewlett bequest. This includes two landscapes by the impressionist Armand Guillaumin, one of the river Creuse and another of the Île de Ré, showing the influence of the artist's friend Van Gogh. 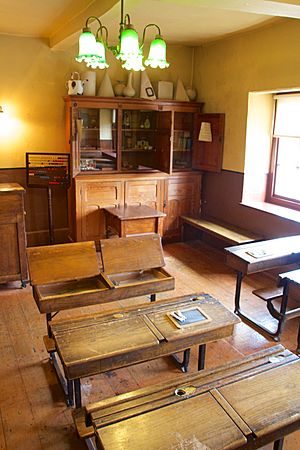 The displays include a nursery with spectacular 3 seater rocking horse and a reconstructed classroom. The center of the collection is the Brian Elder collection of dolls purchased for the museum in 1976. It includes examples of peg dolls, pressed felt dolls by Lenci, poured wax dolls, bisque porcelain dolls and composition dolls by Armand Marseille, Simon & Halbig and S.F.B.J.. In the display cabinets are doll's houses, Lego, Meccano and some Hornby railway trains.

All content from Kiddle encyclopedia articles (including the article images and facts) can be freely used under Attribution-ShareAlike license, unless stated otherwise. Cite this article:
Judges' Lodgings, Lancaster Facts for Kids. Kiddle Encyclopedia.