Julia Davis Park is a municipal park in the downtown region of Boise, Idaho. Created in 1907 with a land donation from Thomas Jefferson Davis, it is the first park in the "String of Pearls", the group of parks operated by the Boise Parks and Recreation Department that are located along the Boise River. Being centrally located in Boise, the park contains several prominent sites, including museums such as the Boise Art Museum, the Idaho Historical Museum, and the Idaho Black History Museum, as well as other attractions like Zoo Boise, the Idaho Rose Society, and the Gene Harris Band Shell. The Boise River Greenbelt runs through the park, which is bordered by Broadway Avenue to the east, Capital Boulevard to the west, the Boise River to the south, and Myrtle Street to the north. Other amenities at Julia Davis Park include river access, statues, a rose garden, a playground and tennis court, a pond with paddle boat rentals, and a pedestrian bridge that connects the park with Boise State University.

Julia Davis Park has its roots in the 1862 journey of two orphans, Thomas and Frank Davis, who traveled to the Boise area from Cincinnati, Ohio, with hopes of joining in the widely publicized gold rush in the Idaho Territory. The brothers staked a claim and mined for a year, before building a cabin in 1863 on the Cottonwood Creek near the site of the present Julia Davis Park. On July 4, 1863, Fort Boise was established and shortly after, the Davis brothers along with seven friends met in the Davis' cabin and planned the formation of the City of Boise. According to one of the friends, William Lowery Ritchie, “in the summer of 1863 the soldiers came and established the garrison; that was sometime early in July. It was about that time we met in our cabin and formed a town co.” Thomas Davis came to play a pivotal role in the development of Boise as a city and sought to help attract visitors and pioneers to the valley. With his mining claim being less than profitable, Davis turned to the promotion of agriculture by planting 7,000 apple trees on his land along the Boise River. Additionally, he started buying up land in the valley from the United States land office, receiving Cash Certificate No. 1 for 160 acres (0.65 km2) in 1868 when the first land office opened up. Within several years, Davis went on to purchase the first water rights in the valley, as well as an additional 1,150 acres (4.7 km2) from the federal government along the foothills and where the town of Garden City was developed. In 1871, Davis married Julia McCrumb, who had travelled to Boise from Ontario, Canada, to visit family in 1869.

Near the end of the century, in 1899, the Davis couple offered a section of their orchard lands for use as a park, but the city was hesitant to act on this offer. They again offered a deed for a park in February 1907. Finally, after the death of Julia Davis in September, presumably from typhoid, the city paid one dollar to Thomas Davis as he deeded 40 acres (160,000 m2) acres of land to the city in memory of his wife in November 1907. He required that the land be utilized for public purposes and that the park would be “always and forever” known as Julia Davis Park. Davis enforced this by including in the deed a stipulation that the land would return to the Davis heirs if the property were ever used for any other purpose. The next year, in 1908, Davis died the morning after a much anticipated Damrosch concert. His death was a sad event to the many Boiseans who attended the funeral and respected the couple's philanthropy.

In the decade following Davis's death, the city worked to improve the park and upgrade the land by adding walls, planting vegetation, and creating a general development plan with the help of Arthur L. Peck in 1912. In 1916, the Boise Zoo, now known as Zoo Boise, was created when a monkey was found in the desert near Mountain Home. During the next decade, the park expanded with a series of land donations from the Davis estate in 1922, 1929, 1931, and 1932. During this time, a bandshell was built in the park in 1928, and the Boise Zoo expanded in 1929. In 1931, the Morrison-Knudsen Company built the Capitol Boulevard Memorial Bridge next to Julia Davis Park. As the economy improved following the Great Depression, Julia Davis Park saw the dedication of a rose garden in 1939, and the expansion of the park to its current borders from Capitol Boulevard to Broadway Avenue in 1940 and 1941.

Meat rationing as a result of World War II occurred also in 1941, which put away meat-eating animals in Zoo Boise. In 1950, the Idaho Historical Museum was established on the park grounds, and Union Pacific donated Engine 2195, called "Big Mike", to Julia Davis Park in 1959. In 1966, the city began developing the Boise River Greenbelt, and in 1972, the Boise Gallery of Art underwent an expansion. The Bob Gibb Friendship Bridge was built to connect the greenbelt, as well as the park, with Boise State University across the river in 1980. The Idaho Historical Museum grew in 1982, and in 1986, the Gallery of Art was renamed the Boise Art Museum during a renovation. By 1997, the art museum expanded to 34,800 square feet (3,230 m2). A year later, the Idaho Black History Museum was established in the Old St. Baptist Church in 1998. In 2002, Jerry Snodgrass created a statue memorializing pioneers to the Boise area such as Julia Davis. A century after the park was established, a Centennial Celebration took place on June 23, 2007, and the city began a “Second Century” campaign to improve the park. 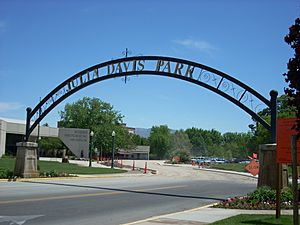 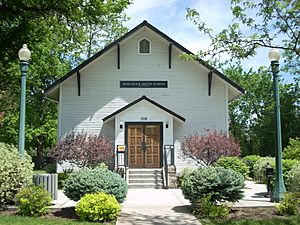 In 1916, a circus traveled through Mountain Home. During the stop, a monkey escaped from captivity and was finally found in the Mountain Home Desert, long past the circus's departure. Boise being the home for the newfound monkey, a Boise Zoo was then founded. Zoo Boise draws many visitors to Julia Davis Park. In 2008, Zoo Boise opened a $2.8 Million African Plains exhibit which includes a new African Village, three small exhibit areas (housing rock hyrax, weaver birds, and lemurs), and two large exhibit areas (housing African lions, striped hyenas, giraffes, zebras, amur leopard, snow leopard, penguins, red pandas, and tigers). A Primate Building as well as an aviary stands between these two exhibits.

On November 17, 2012, two men wearing dark clothing broke into the zoo, killing a patas monkey. A security guard observed the men around 4:30 AM near the primate exhibit. Both men fled, while one went into the interior of the zoo. Police couldn't find the suspects, only finding a grey baseball cap. Zoo officials say that they have no security cameras in the entire zoo. The zoo remained closed until 2:30 PM, reopening normally the next day.

Michael J. Watkins, age 22, of Weiser, Idaho, was subsequently arrested for the crime. Officials allege that while Watkins was attempting to steal the monkey, he was bitten by it. In response, Watkins killed the monkey by bashing its head and neck with a tree branch.

The addition of a rose garden to the park originated with H.C. Schuppel in 1935, a chairman of a rose garden club called the "Cut Worms." Work on the project began in earnest in 1939 with a total of 2800 roses planted (some from Villa Nurseries in Portland, Oregon). It was also in this year that the Rose Garden was officially dedicated. A key development came later in 1979 with the establishment of the Memorial Rose Fund. This fund was intended to help create memorials in the garden for friends and family members. National recognition was given to the Rose Garden in 1992 when it received its Public Rose Garden accreditation. As a result of this, 10 bushes of All American winners are given to the Garden yearly. The Garden is also often the site of wedding ceremonies. 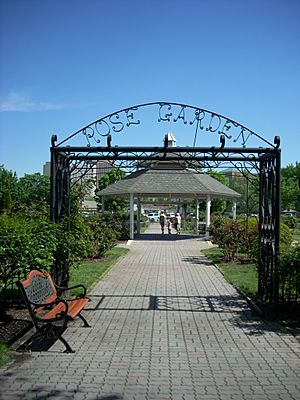 Next to Julia Davis' pond lies the Discovery Center of Idaho, completed in 1988. Its stated mission is to inspire lifelong interest and learning in science, technology, engineering and math.

Founded in 1931 as Idaho's premier art association, the Boise Art Museum provides an epicenter for Boise's art scene. Along Julia Davis Park, the BAM organizes the appearance of fine art that would otherwise pass from the communities eyes. Each year, with assistance from Boise's local art scene, cooperative government, and Idaho Parks and Recreation Department, the Boise Art Museum hosts “Art In the Park” in Julia Davis Park. An event to bring about Boise's local art scene and locally owned businesses, assisting visitor numbers to Julia Davis Park.

Located inside of Julia Davis Park is the Gene Harris Bandshell. Playing multiple free concerts for the park visitors and bringing musical culture to the people, the Gene Harris bandshell was initially built in 1928 and dedicated to Gene Harris in 2001. Some infamous concerts at the bandshell include, The Velvet Underground, the Wailers, Pete Seeger (October 6, 1968), and the Boise City Band (August 15, 1948). 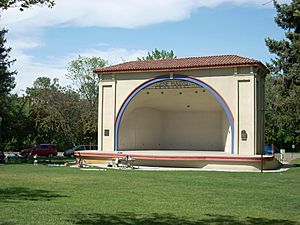 Projects underway in Julia Davis Park include a new “Grand Plaza” for large events and gatherings, a history walk amongst several new pavilions, the addition of four new river nodes, and a new “Golden Apple” interactive history tour. The Grand Plaza is planned to take the form of a broken circle centered on a bronze medallion inset into the pavement and is intended to provide social and operational space. Five new or refurbished pavilions will be built to provide a picnic area, concert center, and gathering space. Each of the five river nodes is intended to bring out the beauty and reflective nature of Boise's wildlife, brush, and river. The nodes will be centered on a pedestal made of stained steel and copper and will have information on the park's history. There will be a history walk linking the different sites with historical information, and a “Quest for the Golden Apple” which will have thirteen stops with information on Idaho history and nature.

All content from Kiddle encyclopedia articles (including the article images and facts) can be freely used under Attribution-ShareAlike license, unless stated otherwise. Cite this article:
Julia Davis Park Facts for Kids. Kiddle Encyclopedia.