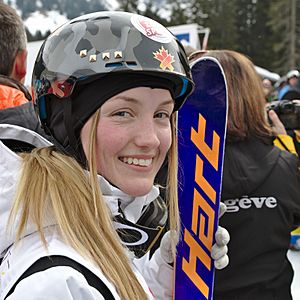 Justine Dufour-Lapointe (born March 25, 1994 in Montreal, Quebec) is a Canadian freestyle skier. She skied in the moguls events for Canada at the 2014 Winter Olympics in Sochi where she won a gold medal. Her sister Chloé Dufour-Lapointe also won a silver medal in the event which was the first time that Canadian sisters stood together on the podium. When she won the gold medal, she became the youngest freestyle skiing Olympic champion ever at 19. She also won a bronze medal in the moguls event at the 2013 FIS World Championships. It was the first gold medal win for Canada at the 2014 Winter Olympics.

All content from Kiddle encyclopedia articles (including the article images and facts) can be freely used under Attribution-ShareAlike license, unless stated otherwise. Cite this article:
Justine Dufour-Lapointe Facts for Kids. Kiddle Encyclopedia.