Tamara Platonovna Karsavina (10 March 1885 – 26 May 1978) was a Russian ballerina. She began her career in the Imperial Russian Ballet and later danced with the Diaghilev's Ballets Russes.

Karsavina created the title role in The Firebird, the Ballerina in Petrushka, and The Young Girl in Le Spectre de la Rose. After she settled in Hampstead, London, she began teaching ballet professionally. She assisted in setting up The Royal Ballet, and was a founding member of the Royal Academy of Dance. Her pupils included Dame Alicia Markova and Dame Margot Fonteyn. She wrote two books: the autobiography Theatre Street (1930) and the dance textbook Classical Ballet: the flow of movement (1962). 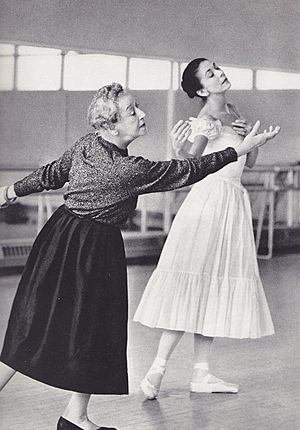 All content from Kiddle encyclopedia articles (including the article images and facts) can be freely used under Attribution-ShareAlike license, unless stated otherwise. Cite this article:
Tamara Karsavina Facts for Kids. Kiddle Encyclopedia.