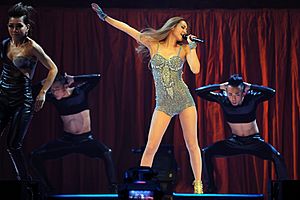 Kary Ng at her second coliseum concert THE PRESENT

Kary Ng (born 9 June 1986) is a pop rock singer in Hong Kong. When she debuted, she had been a member of a music group, Cookies; however, the members of Cookies were eventually arranged to explore their respective solo careers in 2005, and the group is now disbanded. She had temporarily been the lead vocals of rock band Ping Pung in 2004, but Ping Pung had also disbanded after only releasing one album that same year. Commencing in 2005, Ng had officially begun developing her career as a solo artist.

As a girl, Ng had studied at the Canadian International School of Hong Kong. She had made references to her nickname "Lady K" in the album titles "Lady K Live" and "Lady K: Transformation".

In 2002, at age 15, Ng was one of the nine members and also youngest of the girl band Cookies, signed under record giant Gold Label of EMI Hong Kong. That same year, she became the youngest recipient to have ever earned a CRHK music award when Cookies were awarded "Best Group Newcomer – Bronze Award"; she was 16 at the time and currently still holds this record. Her male counterpart of this record is Nicholas Tse, who was 17 when he received "Best Male Newcomer – Silver Award" in 1999.

In 2003, Cookies were downsized from the original nine members to only four members. Ng was one of the four members who successfully remained with the group, along with Stephy Tang, Theresa Fu, and Miki Yeung.

In 2004, she joined another rock band – Ping Pung and released the album "Love & Hate". During this time, she continued to retain her membership in Cookies.

In 2007, her second solo album, "In Control", earned her the "Media Award – Album" from the Four Station Joint Music Awards, which presents its awards based on charting results from all four of the music stations in Hong Kong. Ng was the second female singer to have ever received this award, with Miriam Yeung being the first in 2004. She is currently the youngest female recipient of this award, as she was only 21 at the time; her male counterpart is, again, Nicholas Tse, who received the same award in 1999 for his album "Believe", when he was 19.

In January 2008, Ng held three shows for her first concert "Kary Lady K Live 08". On 30 May 2008, she also appeared as the special guest for Leo Ku's North American The Magic Moments Concert in Toronto, Ontario, Canada in front of a crowd of 10,000 people.

In April 2008, Ng had won the award for "Best Original Film Song" for「逼得太緊」at the 27th Hong Kong Film Awards, with the track being the theme song of the film, Love Is Not All Around. The film had been nominated in only two categories, with the other being Linda Chung nominated for Best New Performer; "Best Original Film Song" was the only award the film took home that night. 「逼得太緊」proved to be her most successful song at music awards shows, as it had won a Top Ten Songs of the Year award from each of the four radio stations in Hong Kong.

In July 2008, her third album "Lady K: Transformation" was released. Ng began experimenting with various styles of pop while keeping her trademark rock sound, as there are notable synthpop, R&B, contemporary R&B and dance-pop undertones on several tracks of the album. In December, her first Best Selection album "Kary 18 CUTS" was released, along with three new songs.

In February 2009, she performed at the S.U.C.C.E.S.S. Charity Gala at Vancouver, British Columbia, Canada with many other artists. In October, the exclusive Asian Bonus Track of the song "Everyday" (in Cantonese) was released, featuring her and singer Justin Lo for the smash hit Disney Channel Original Movie, High School Musical 2 (soundtrack).

On 24 April 2009, Ng and Alex Fong appeared at the Melbourne Arts Center for their Melbourne '09 Show. In the same year, her new EP "Keep Breathing" was out. The promotion for the EP included "Neway Music Live 09 x Kary".

In 2010, Ng cooperated with Hong Kong underground rock band Hardpack and released an EP "合+歡" and announced to have her first concert in Hong Kong Coliseum.

On 30 January 2011, Ng had her first concert, Kary On Live 2011, in Hong Kong Coliseum. Her EP, Carry On, was released before the HKC concert, and it is the last record that she would release with Gold Label Records before her contract terminated the same year. In the same year, she signed with Cinepoly Records. In October, Ng became the only Asian female singer to perform in the Universal Music Group's annual summit in South Korea.

In 2013, Ng held her second concert in Hong Kong Coliseum, The Present Concert 2013 on 8 and 9 January. At17 and Gigi Leung appeared as planned guest performers while her previous colleagues Justin Lo and Stephy Tang, Miki Yeung, and Angela Au appeared as surprise guest performers; Lo appeared on 8 January show while the three former Cookies members appeared on 9 January show. On 11 May of the same year, Kary held another show of The Present Concert 2013 in Macau at The Venetian Macao.

On 20 November of the same year, Kary Ng released her 12th album, State of Mind; it is the first album where she had participated in the compositions of each recorded track. 「生我的命」 from the album received a Top Ten Song award from the CRHK Music Awards, making it the first time Kary has received a Top Ten Song award for one of her own compositions. It is also the first year where she had received an "Outstanding Singer Award" from the RTHK Top 10 Gold Songs Awards.

Ping Pung (as a member of rock band)

Before reconciling and getting married, Ng had dated previous professional tennis player, Brian Hung, from 2007 to 2011; they had begun as childhood friends, having met when Ng was thirteen years old. During the press conference for her first Hong Kong Coliseum concert, Kary On Live 2011 in December 2011, Ng revealed that she and Hung have parted peacefully after four years of dating. During her Kary On Live 2011 concert, as an introduction to her song 「絕配」, Ng made a speech that alluded to her past relationship with Hung:

Four years ago, I fell in love with someone. We experienced a lot together. From him, I learned how to love someone, how to forgive, how to cherish... At the time, I felt like a princess who has met her prince; I felt like I found my perfect match, but I have realized that sometimes, being a perfect match isn't enough. At many times, we'll experience many hardships. We might experience a lot of judgment and criticisms from others. However, I will still believe in love. I will still courageously dare to love. I hope all of you will also have this form of courage.

On 18 October 2014, Ng disclosed that she has reconciled with Brian Hung, her previous boyfriend of four years. She expressed that they had reconnected through church, as she had resumed her attendance earlier in the year, and that her parents strongly support her relationship. After his tennis career, Hung is now working in the finance industry. On 17 January 2015, there had been reports claiming that Ng will be getting married with Hung in United States during a vacation between the two families while holding a wedding banquet in Hong Kong in July 2015.

All content from Kiddle encyclopedia articles (including the article images and facts) can be freely used under Attribution-ShareAlike license, unless stated otherwise. Cite this article:
Kary Ng Facts for Kids. Kiddle Encyclopedia.