Kasota is a city within the larger Kasota Township, Le Sueur County, Minnesota, United States. The population was 675 at the 2010 census.

Kasota is about halfway between the cities of Mankato and St. Peter on the eastern side of the Minnesota River. According to the United States Census Bureau, the city has a total area of 1.00 square mile (2.59 km2), all of it land. The city center is about two miles north of the Kasota Prairie, designated as a Scientific and Natural Area by the state Department of Natural Resources.

Minnesota State Highway 22 serves as a main route in the community. U.S. Route 169 is nearby, on the western side of the Minnesota River.

Kasota was platted in 1855. Kasota is a name derived from the Dakota language meaning "cleared off".

On July 1, 1892, the Sontag Brothers, John Sontag and George Contant, and their partner in crime, Chris Evans, tried to rob a train between St. Peter and Kasota along the Minnesota River. The bandits acquired nothing of value during this holdup, but their activities came under the review of Pinkerton detectives and both were apprehended in June 1893. year. 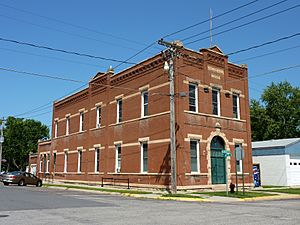 The Kasota Village Hall is on the National Register of Historic Places.

Babcock also was the first to begin quarrying Kasota limestone in and around the city of Kasota. The Babcock Company was the chief stone company throughout the early history of the city, and according to the Kasota Historical Society the relationship between the stone company and the city was less than spectacular. At one point the Babcock Company decided to blast within the city limits. This led to the creation of the park on County Road 21 in the town center, after the company was forced to fill in the quarry near the homes of city residents.

During the 1880s, the stone industry experienced an unexpected boom. It was during this time that C.W. Babcock took over the business from his father. He began applying modern quarrying methods, and in 1889 he formed a partnership with Tyrrell Swan Willcox, an immigrant from Rugby, England, who was instrumental in promoting the use of polished Kasota Stone for interior and exterior residential use. Much of the industry's boom was caused by the expansion of the railroads westward, requiring large quantities of stone for trestles and culverts.

Kasota stone was selected as the primary stone in the building of the National Museum of the American Indian in Washington, DC. as well as the Eiteljorg Museum of American Indians and Western Art in Indianapolis, IN

Kasota (Dakota for "a cleared place") was the name of a wooden Great Lakes iron ore steamer, built in 1884. The Kasota sank after colliding with the passenger steamer The City of Detroit on the Detroit River on July 18, 1890. The Kasota was salvaged and rebuilt in 1892 but sank again after springing a leak during a storm off Grand Marais, Michigan, on September 19, 1903.

The USS Kasota was a naval tugboat, launched in 1944 and struck from the Navy list in 1961. It is believed that the Kasota (also known as the "Mighty Deuces") was the last wooden hull tug in the Navy at the time. 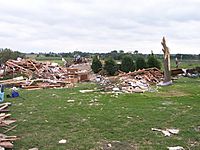 Damage from the 2006 Dakota–Minnesota tornado outbreak in Kasota

There were 293 households of which 29.0% had children under the age of 18 living with them, 43.0% were married couples living together, 10.6% had a female householder with no husband present, 6.1% had a male householder with no wife present, and 40.3% were non-families. 31.7% of all households were made up of individuals and 7.2% had someone living alone who was 65 years of age or older. The average household size was 2.30 and the average family size was 2.84.

There were 275 households out of which 34.2% had children under the age of 18 living with them, 49.5% were married couples living together, 15.3% had a female householder with no husband present, and 28.4% were non-families. 21.1% of all households were made up of individuals and 8.4% had someone living alone who was 65 years of age or older. The average household size was 2.46 and the average family size was 2.81.

All content from Kiddle encyclopedia articles (including the article images and facts) can be freely used under Attribution-ShareAlike license, unless stated otherwise. Cite this article:
Kasota, Minnesota Facts for Kids. Kiddle Encyclopedia.