St. Peter is a city in Nicollet County, Minnesota, United States. It is 10 miles north of the Mankato – North Mankato metropolitan area. The population was 12,066 at the 2020 census. St. Peter is the county seat of Nicollet County and home to Gustavus Adolphus College.

U.S. Highway 169 and Minnesota State Highways 22 and 99 are three of the city's main routes. 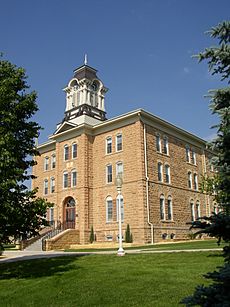 The first class graduated from St. Peter High School in 1880. The first superintendent of St. Peter Public Schools was Andrew Ryan McGill, who served from 1865 to 1868. McGill was Minnesota's 10th governor from 1887 to 1889.

Scholarship America is based in St. Peter.

The following routes are within St. Peter:

All content from Kiddle encyclopedia articles (including the article images and facts) can be freely used under Attribution-ShareAlike license, unless stated otherwise. Cite this article:
St. Peter, Minnesota Facts for Kids. Kiddle Encyclopedia.