Kawaiahaʻo Church is a historic Congregational church located in Downtown Honolulu on the Hawaiian Island of Oʻahu. The church, along with the Mission Houses, comprise the Hawaiian Mission Houses Historic Site, which was designated a U.S. National Historic Landmark (NHL) in 1962. In 1966 it and all other NHLs were included in the first issuance of the National Register of Historic Places.

At one time the national church of the Hawaiian Kingdom and chapel of the royal family, the church is popularly known as Hawaiʻi's Westminster Abbey. The name comes from the Hawaiian noun phrase Ka wai a Haʻo (the water of Haʻo), because its location was that of a spring and freshwater pool of a High Chieftess Haʻo. It has also been called the "hale pule lahui", the Great Stone Church, the Hawaiian Tabernacle (luakini), the Mother Church, the Kingʻs Church, the Kingʻs chapel, and the "Aliʻi Church".

Today, Kawaiahaʻo continues to use the Hawaiian language for parts of the service. It is the oldest church on Oʻahu and one of the oldest standing Christian places of worship in Hawaiʻi, although four thatched churches stood at or near the present site before construction of the coral church. The oldest standing church is Mokuaikaua Church on the Big Island. Denominationally, It is a member of the United Church of Christ.

First known photograph of the church in 1857 by Hugo Stangenwald

The Kawaiaha'o mission was started in 1820. The stone building of Kawaiahaʻo Church was commissioned by the regency of Kaʻahumanu, during the reigns of Kamehameha II and Kamehameha III. Designed by Rev. Hiram Bingham in the New England style of the Hawaiian missionaries, it was constructed between 1836 and 1842 of some 14,000 thousand-pound slabs of coral rock quarried from an offshore reef on the southern coast of Oʻahu. Hawaiian divers dove three to six metres below sea-level to chisel out each coral block with hand tools, and the blocks then were transported from the reef onto the shore.

The church house rivaled the concurrent construction of the Cathedral of Our Lady of Peace by the Roman Catholic Apostolic Vicariate of the Hawaiian Islands. Construction began on that churchhouse in 1840 and was substantially completed in 1843, one year after the completion of Kawaiahaʻo Church.

The name Kawaiahaʻo was not applied to the site until 1853.

Kawaiahaʻo Church was frequented by the chiefs of the Hawaiian Islands as well as the members of the reigning Kamehameha Dynasty and Kalākaua Dynasty. Kamehameha III, Kamehameha IV, Kamehameha V and Kalakaua took their oaths of office to their constitutions at Kawaiahaʻo Church. State burials were also held at the church as well the baptisms of aliʻi including aliʻi members who would eventually convert to other denominations or faiths.

Today, the upper gallery of the sanctuary is adorned with 20 portraits of Hawaiian royalty (Aliʻi). The body of King Lunalilo, who preferred burial in a church cemetery to burial in the Royal Mausoleum, is buried in a crypt along with his father near the front courtyard.

But Kawaiahaʻo Church was not the only site of royal worship in the Islands. Kamehameha IV and his wife Emma were devout members of the Church of England and established the Anglican Church of Hawaiʻi, which evolved into the present-day Episcopal Diocese of Hawaiʻi after the islands were annexed by the United States and later gained statehood. The royal couple commissioned the construction of the Cathedral Church of Saint Andrew, which replaced Kawaiahaʻo Church as the principal centre of royal worship. Kamehameha V, Kalākaua, and Liliʻuokalani (after the rebellion which overthrew the kingdom) preferred to use the cathedral – even though, before her reign, then Princess Liliʻuokalani had directed the choir of Kawaiahaʻo Church. When Liliʻuokalani died in 1917, she lay in state in the church for a week before her funeral at Iolani Palace.

Other well-known persons associated with the church include:

John (Ioane) Iʻi, an advisor to Kamehameha III and teacher at the Chiefʻs Children School;

John Thomas Gulick, a missionary to Micronesia and head of the Hawaiian board of Foreign Missions to Oceania and the Philippines;

Daniel Opunui, one of the first Protestant missionaries in Micronesia was member of Kawaiahaʻo Church before Kaumakapili Church was built;

Henry Berger, band master of the Royal Hawaiian Band and is buried at Kawaiahaʻo Church.

Miss Agnes Baldwin Alexander, born in Honolulu in 1875 to William DeWitt Alexander and Abigail Charlotte Alexander, née Baldwin. Miss Alexander was a scion of two of Hawaii’s most illustrious Christian missionary families — the Alexanders and the Baldwins. In 1900 Agnes discovered the Baháʼí Faith while in Rome on a tour of Europe, which she had undertaken after a severe illness. In 1901 she returned to Hawaii as its first Baháʼí.

Abraham Akaka, late pastor of the Kawaiahaʻo Church and most remembered for his role in the US Civil Rights Movement. 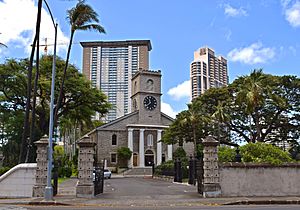 All content from Kiddle encyclopedia articles (including the article images and facts) can be freely used under Attribution-ShareAlike license, unless stated otherwise. Cite this article:
Kawaiahaʻo Church Facts for Kids. Kiddle Encyclopedia.