Katherine Edwina "Kay" Francis (née Gibbs, January 13, 1905 – August 26, 1968) was an American stage and film actress. After a brief period on Broadway in the late 1920s, she moved to film and achieved her greatest success between 1930 and 1936, when she was the number one female star at the Warner Brothers studio and the highest-paid American film actress. Some of her film-related material and personal papers are available to scholars and researchers in the Wesleyan University Cinema Archives. 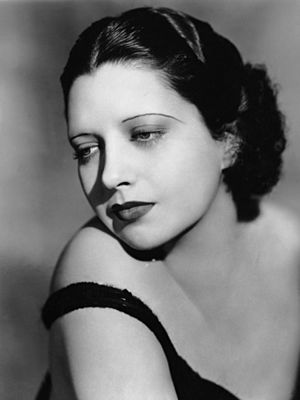 Francis was born in Oklahoma City, Oklahoma Territory (present-day Oklahoma), in 1905. Her parents were Joseph Sprague Gibbs and actress wife Katharine Clinton Francis. Francis inherited her unusual height from her father, who stood 6 feet 4 inches. She was to become Hollywood's tallest leading lady of the 1930s at 5 ft 9 inches.

In 1966, Francis was diagnosed with breast cancer and underwent a mastectomy, but the cancer had spread and proved fatal. Having no living immediate family members, Francis left more than $1,000,000 to The Seeing Eye, which trains guide dogs for the blind. She died in 1968, aged 63. She wanted no services or marker either.

All content from Kiddle encyclopedia articles (including the article images and facts) can be freely used under Attribution-ShareAlike license, unless stated otherwise. Cite this article:
Kay Francis Facts for Kids. Kiddle Encyclopedia.