Keith is a small farming town in the south-east of South Australia. It is approximately 225 km from Adelaide at the junction of the Dukes Highway and the Riddoch Highway. It is sometimes referred to as the 'lucerne capital of Australia' due to the high number of lucerne growers in the region. At the 2006 census, Keith had a population of 1,089. then in 2011 census, Keith had a population of 1,320.

A large granite outcrop outside the town called Mount Monster was a basis for the area's name until it was surveyed in 1884 and officially proclaimed Keith in 1889. It is believed that the town is named after the home town of the Governor of South Australia at the time, Lord Kintore. His home in Aberdeenshire in Scotland was called Keith Hall and he was also known as Earl of Kintore. The Post Office opened around 1874 as Mount Monster and was renamed Keith in 1904. In 1905 the general store was opened, and in 1907 the education department rented rooms out of the local institute to use as the school. 1910 saw the opening of Keith Hotel and the town's provisional school became a public school in 1912.

During the 1940s, the CSIRO found prosperity in the area. With the addition of trace elements, the area became a very productive area. The AMP Society funded the clearing of land to set up farming establishments. A Land Rover sits a top a pole in a historical landmark in the town. In 1957, the local school was made into an area school to accommodate the influx of students. 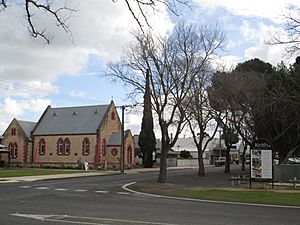 Several historical buildings still stand today, and many are still in use. The first school building built in the township is still in use by the school. The 1910 church with contemporary lead light windows inspired by local history is a common tourist attraction.

Local artist James Darling designed the local water feature, which celebrates the cycle of water through the Australian landscape and the region's widespread water irrigation.

The local industry is predominantly grain production and livestock grazing. More recently, olive production has been gaining momentum around the area, with a large processing plant opening recently. 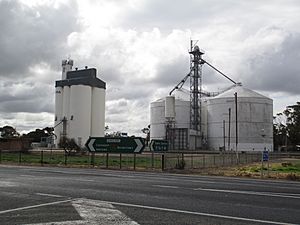 Grain silos by the railway at Keith

The town slogan is 'You're in the good country now' and can be found on stubby holders and fridge magnets at the towns main roadhouse.

The town has an Australian Rules football team competing in the Kowree-Naracoorte-Tatiara Football League.

Keith has a Mediterranean climate with mild, damp winters and warm to hot, dry summers. In the months of January and February 2014, Keith broke its record high temperature on two occasions, recording 46.0 °C on the 14 January, and then recording 46.5 °C on the 2 February, breaking the previous record by 0.5 °C and again by 1 °C.

All content from Kiddle encyclopedia articles (including the article images and facts) can be freely used under Attribution-ShareAlike license, unless stated otherwise. Cite this article:
Keith, South Australia Facts for Kids. Kiddle Encyclopedia.