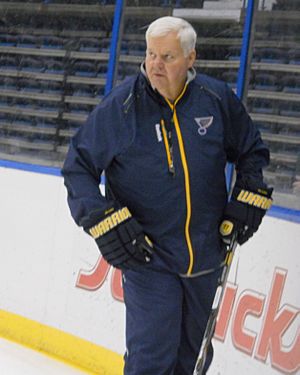 Ken Hitchcock (born December 17, 1951 in Edmonton, Alberta) is a Canadian NHL ice hockey coach. He coaches the Columbus Blue Jackets. He has also coached the Dallas Stars and the Philadelphia Flyers in the past. Ken has won one Stanley Cup with the Dallas Stars in the 1998-99 NHL season.

All content from Kiddle encyclopedia articles (including the article images and facts) can be freely used under Attribution-ShareAlike license, unless stated otherwise. Cite this article:
Ken Hitchcock Facts for Kids. Kiddle Encyclopedia.