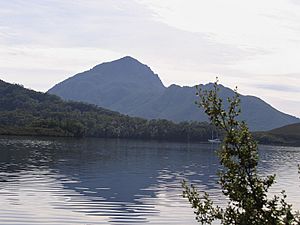 Much of the area is part of the South West Wilderness, such as Bathurst Harbour shown here

No hundreds and parishes were proclaimed for Kent County at this time.

All content from Kiddle encyclopedia articles (including the article images and facts) can be freely used under Attribution-ShareAlike license, unless stated otherwise. Cite this article:
Kent Land District, Tasmania Facts for Kids. Kiddle Encyclopedia.